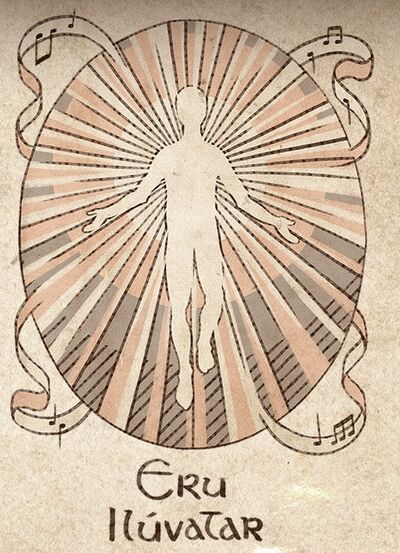 Eru is the God of Lord of the Rings, who created all the Ainur with his thoughts and taught them music. Together, they sung a Song of the Ainur, but the first harmony was destroyed by Melkor. Eru introduced a second harmony, with Manwë, brother of Melkor, as the leading role, however Melkor destroyed this too. Eru finally introduced a third harmony, seemingly just a ripple of music, but that could not be destroyed by Melkor. For a time there was a war of music, but then Eru put an end to it. He showed all the Ainur a vision of Eä, bringing it in to being by declaring "Eä!" Many of the Ainur went into Eä after this, but not all.

He intervened several times across the history of Arda; by giving sentience to the dwarves, reforming Arda at the behest of the Valar to separate the Blessed Lands of Aman from Middle-Earth, and casting Gollum into the Crack of Doom. He was invoked by Fëanor in his oath to reclaim the Silmarils. It is said that he will sing a new song of creation with the Ainur and the Children of Ilúvatar after the defeat and destruction of Morgoth. In this song, every living being shall know their place, singing a perfect harmony to create a new world.

Gender: Often referred to as male

Classification: Supreme Being and Creator

Attack Potency: At least Low Multiverse level (Stronger than all of the Ainur combined, and created them with just his thoughts. Stated that Arda - the Universe in which Lord of the Rings takes place in - was "but a small realm in the halls of Eä, whose life is Time, which flows ever from the first note to the last chord of Eru." Eä is itself called "the little kingdom.")

Speed: Immeasurable (Exists in the timeless halls and is superior to the Ainur who can move through it freely)

Standard Equipment: The Secret Fire: The Secret Fire lived inside Eru, despite Melkor's belief that it existed in the Void. He sent it into Eä to give life to the Children of Ilúvatar.

Notable Attacks/Techniques: Eru is the supreme being of Lord of the Rings, and as such wields the power of every being to have existed in the universe, and vastly eclipses them in knowledge and power.

Ainulindalë: The Song of the Ainur, which Eru sings with his creations in order to make the universe. Every concept and being has its place in the harmony of Eru, which contains all of time, and is the origin of every object. The various themes of the music form each of the various concepts, forming the laws of reality, which contains a small multiverse.

"Deeper than the Abyss, higher than the Firmament, piercing as the light of the eye of Ilúvatar": Eru was able to bring the music of the Ainur to an end, with a single powerful chord, stopping the massive battle of music which was reshaping the universe.

"Eä!": Eä is the Quenya verb for be, and this is exactly what "Eä!" means. With this one word, Eru brought the entire universe into being, filling all of the endless space with matter. But it was unformed, and required the mightiest of the Valar to come together to form even parts of it. This new space was called Eä, the world that is.

Visions: Eru was able to grant visions to the Ainur, showing them what they created in there music, and how the universe would look, prompting many of them to go into Eä and become the Valar and Maiar.

Sentience: Eru could instantly grant souls to any creation, such as the Children of Ilúvatar and the dwarves, who he granted souls after Aulë created them, prompting them to cower in fear when he moved to smite them and moving Eru to pity, letting them live in Arda.

Spatial Manipulation: Eru reformed Arda at the plea of the Valar. Arda was originally flat, until Eru made it spherical and removed the huge continent of Aman from it, placing it in an alternate universe that could only be reached by the Straight Road.

Lord of Games (Banjo-Kazooie) Lord of Games' Profile (Both at respective 2-C version. Speed was equalized)

The Watcher (Sims) The Watcher's Profile (Eru was bloodlusted, and speed was equalized)