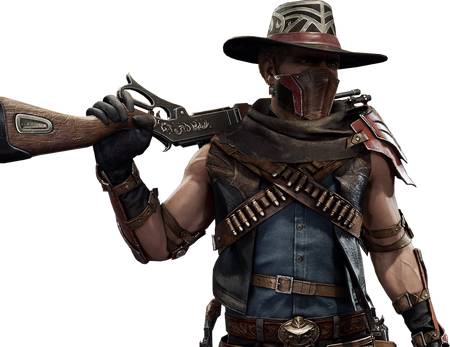 The best shot in Texas left home to seek adventure and excitement in Outworld with Kano and the Black Dragon. Outworld turned out to be the playground of Erron's ultraviolent dreams. He decided to make his home there as the deadliest outlander in Outworld.

Powers and Abilities: Superhuman Physical Characteristics (Has superhuman strength allowing him to fracture chains and crush skulls), Stealth Mastery (Skilled in surprise attacks), Weapon Mastery (Wields revolvers, rifles, grenades, swords, traps, improvised weapons [such as dirt or sand] and makeshift weapons. Has superior accuracy with two revolvers allowing him to ricochet bullets off of airborne coins without aiming down the sights even if he isn't looking at them. Utilizes his guns in conjunction with hand-to-hand combat), Longevity (His aging process was slowed down via magical means), Limited Sand Manipulation (Uses sand grenades), Limited Acid Manipulation (Carries a flask of acidic Zaterran spit), Corrosion Inducement (Acidic spit has corrosive properties), Limited Explosion Manipulation (Via TNT sticks), Acrobatics (Via enhanced conditions, hypermobility and some degree of all-terrain mobility. Can do kip-ups, forward jump rolls and do drop kicks) Can interact with his past self, but will share with it irreparable damage & death (As shown with other characters in MK11)

Intelligence: Above Average; skilled combatant. Should have a lot of combat experience during his stay in Outworld and still retains his gunslinging skills from Earthrealm.

"You won't be touching him again."

Gunslinging at its finest.
Add a photo to this gallery