Ermac was one of Shao Kahn's deadliest and enigmatic warriors. In the original timeline it was created with the souls of many Outworld warriors that died in battle while the souls of the Edenians that tried to resist Kahn invasion in the current one. After the death of the emperor, it helped Liu Kang soul into freeing his friends enslaved by Onaga in the original timeline, while it initially sided with Mileena and later with Kotal Kahn in the current one.

Gender: Undefined; typically referred to as a male

Age: Approximately 25 years since his creation, much higher considering he is composed of Edenian souls

Range: Standard melee range. Hundreds of meters with magic (Shook a bell tower when he used his powers)

Standard Equipment: His axe | None notable.

Intelligence: Genius; has the experience and skills of the countless warriors who fought in Outworld's wars.

Weaknesses: The longer Ermac is in the Netherrealm, the weaker the bond between souls become. 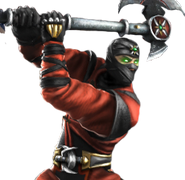 MK9 Ermac.
Add a photo to this gallery