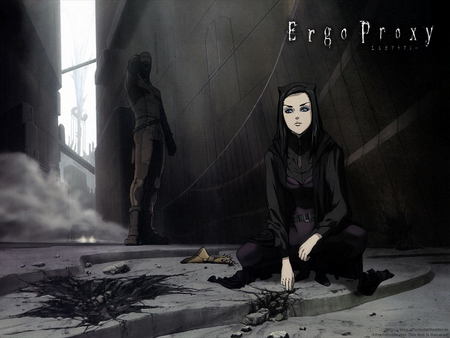 Ergo Proxy is a science fiction suspense anime television series, produced by Manglobe, directed by Shukō Murase and written by Dai Satō. The anime originally aired from February 25 to August 12, 2006 on the WOWOW satellite network, lasting 23 episodes. It is set in a post-apocalyptic future where humans and AutoReivs androids coexist peacefully inside a domed city until a virus gives them self-awareness. The robots then rebel and commit a series of murders. Inspector Re-L Mayer is assigned to investigate. She discovers there is a more complicated plot behind it that involves humanoid species known as 'Proxy' who are the subject of government secret experiments. The plot mainly revolves around the Proxies, mysterious beings that are incredibly fast, strong, and powerful, and immortal with the exception of being killed by other Proxies, FP rays, or blue sky (sunlight, apparently). This could be taken as a NLF, so it's important to note. The Proxies also have very strong regenerative powers, capable of regrowing severed limbs in seconds.

The series, which is heavily influenced by philosophy and Gnosticism, features a combination of 2D digital cel animation, 3D computer modeling, and digital special effects. After its release in Japan, the anime was licensed for a DVD release by Geneon Entertainment USA, with a subsequent broadcast on Fuse TV. The show was also distributed to Australian, British and Canadian anime markets. Since its release, Ergo Proxy has received mostly favorable reviews which praised its visuals and themes.

Ergo Proxy is considered to be a rather weak universe, with only a couple of supersonic characters. The Proxies have survived missile strikes from helicopters, putting them solidly at building level durability. They are also to a degree immortal.

Retrieved from "https://vsbattles.fandom.com/wiki/Ergo_Proxy?oldid=3877329"
Community content is available under CC-BY-SA unless otherwise noted.