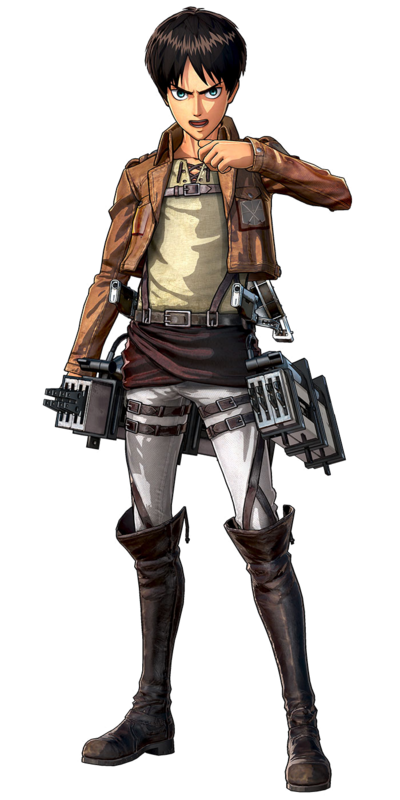 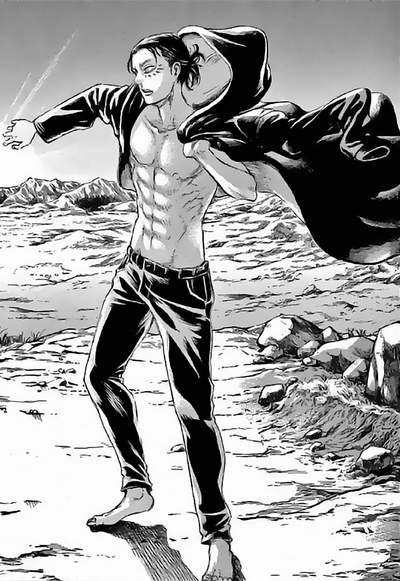 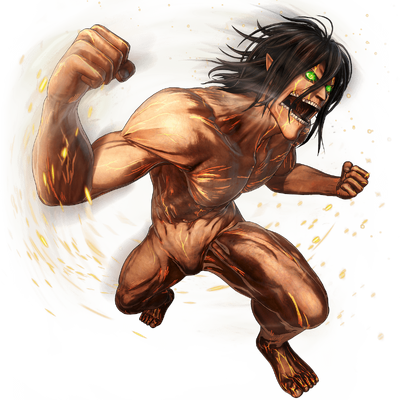 Eren Yeager is the main protagonist of Attack on Titan. He lived a peaceful life in Shiganshina District with his now late parents Grisha and Carla Yeager, and his adoptive sister Mikasa Ackerman, until the town was destroyed by Titans during the fall of Wall Maria.

After witnessing the death of his mother at the hands of the Smiling Titan, he vowed to wipe out all Titans in revenge. He joined the 104th Training Corps along with Mikasa Ackerman and his childhood friend Armin Arlert, graduating as the 5th best soldier, and is currently a member of the Survey Corps Special Operations Squad.

After finding the basement and also unlocking his father's memories, Eren learned the truth of what Titans are, and the history of Eldia and Marley. Eren vowed to free his home from their true enemy: the world across the ocean.

From his father, Eren gained the powers of the Attack and Founding Titans. After eating Ms. Tybur, he inherited the War Hammer Titan as well.

Superhuman Physical Characteristics, Regeneration (High-Mid), Large Size (Type 1), Biological Manipulation (Can harden his body and create a web of pillars from his body. With the Founding Titan's power he can change the composition of the bodies of Eldians, making them immune to certain diseases or even sterilizing them), Can control other Titans (Only if he is in contact with someone who possesses royal blood)

Superhuman Physical Characteristics, Regeneration (At least Mid-High. Comparable to the previous War Hammer Titan, who can regenerate its entire body from a hardened barrier), Large Size (Type 1), Biological Manipulation (Can harden his body and create a web of pillars from his body. With the Founding Titan's power he can change the composition of the bodies of Eldians, making them immune to certain diseases or even sterilizing them), Can control other Titans (Only if he is in contact with someone who possesses royal blood), Weapon Creation (Can create objects and weapons with his Hardening)

Lifting Strength: Class 1 (Would need to be able to lift this much to be able to handle the force exerted on his body by the 3D Maneuver Gear) | Class M (Capable of lifting a boulder larger than his Titan body. Casually lifted and carried a ship on his back) | At least Class M (Stronger than before)

Stamina: Very high (Able to survive fatal injuries that could kill a human and keep fighting) | High (Can stay in Titan Form for an hour and a half, but repeated transformations will exhaust him) | Very high (Able to transform into a Titan three times in one battle)

Intelligence: Above Average. During his time in the 104th squad, Eren trained extensively in hand-to-hand combat, eventually becoming skilled in martial arts to the point that he had the best scores for hand-to-hand combat of the entire 104th graduate squad. He received training with Reiner and Annie which diversified his skill set to include the use of punches, throws, grappling and submission locks. This skill carries over to his Titan form and has allowed him to defeat opponents larger than himself such as the Armored Titan.

Regeneration: Eren's Titan form has demonstrated the ability to automatically heal any injury sustained in battle and also to regenerate entire limbs. His healing factor is fast enough to heal an entire lost hand in mere seconds to an entire arm in minutes. As with all Titan shifters, Eren's Titan form can regenerate entirely so long as his human body is undamaged. While in his human state, Eren can also regenerate entire lost limbs. After the timeskip, Eren has demonstrated a mastery of this ability to the extent that he can restrain the regeneration of certain body parts, such as restraining regeneration on his left leg in order to disguise himself as an injured soldier.

Hardening: Eren's Titan form has the ability to harden its body into a crystal-like structure which serves as a highly durable armor. By concentrating this ability in a specific area, such as his fists, Eren can increase the durability of his hardened limbs to the point of being able to break the Armored Titan's armor without damaging his own. After the timeskip, Eren showed improved hardening abilities that allowed him to harden more of his skin, and the ability to harden fast enough to block the hardening web of Ms. Tybur before its spikes could penetrate through his neck to his nape and kill him. Eren also has the ability to create a web of pillars that originate from his Titan body. The hardened pillars are incredibly durable, capable of preventing a cave-in, as well as shielding Squad Levi from the heat of Rod Reiss' Titan form. The constructs, as well as Eren's Titan, also retain their durability and hardened state even after he has been separated from his Titan body.

Creation: Ability provided by the powers of the War Hammer Titan, it allows the user to form objects from the ground, using the hardening ability. These objects can range from weapons such as a giant War Hammer, as well as large spike formations to coat the battlefield and attack the opponent from below. Eren can also manipulate his own Hardening with this ability, allowing him to grow massive spikes from his own body.

Remote Operation: Using the powers of the War Hammer Titan, Eren can create a body of a Titan to be remotely controlled from a distance, enabling him to regenerate his entire Titan body without sustaining any damage to his human form, as well as circumventing the typical weakness of the Titan's nape. This is done by encasing himself in a Hardening barrier and creating a cable of flesh from which he creates the Titan.

Founding Titan: With the power of the Founding Titan that Grisha Yeager stole from the Reiss family, Eren possesses the ability to control nearby Titans, causing them to relentlessly attack his chosen target. However, this ability can only be used while Eren is in contact with a Titan of royal blood.