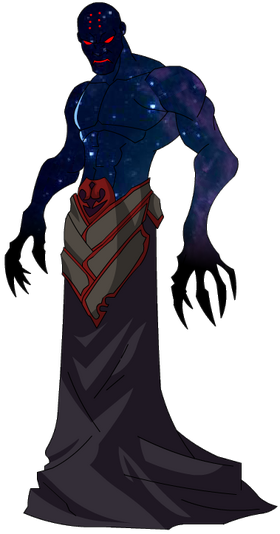 Erebus is a shadow entity that was created through a maelstrom of countless lives of mortals and gods blended together into a massless, shapeless entity that has gained sentience as a result of the great cataclysm that created the Shadow Universe. The Shadow Universe were unable to reproduce the method of his creation, so they abandoned it, preferring to mirror Lore to have some semblance of control. Soon, Erebus became disgruntled and tore open a hole in the universe and escaped to Lore, seeking purpose and freedom. The first being he encountered was the Annunaki Truth who tried to merge with him, but failed and was driven mad, with Truth eventually tearing itself in two, his second half becoming Lies. Erebus entered Lore from outside of time and arrived near the former Guardian Tower at Edress Point, in Deren, where he met his closest analogue, the Mysterious Stranger. To keep himself from dying, Erebus destroyed the Mysterious Stranger with light and absorbed him, allowing for Erebus to take on the form of Seth Cay Dhows and occasionally under the alias of "Mysterious Stranger".

At some point, Erebus forced human beings to dwell in the Shadow Universes and engaged in conflict with Lord Barrius's, eventually forming a truce with Barrius himself and his Order, thinking their conflict would lead them to mutually assured destruction. Throughout history he took the identities of many individuals such as "St. Mohrred" on Arturia and manipulated a group of Network beings called the Alpha and became known as Epsilon. He made his way to Caelestia where he went under the identity of "Tholeon Webb" and managed to alter the timeline so severely that Eldron Larethian was never born by changing the very foundations of Caelestia itself. However, heroes from Caelestia's post-apocalyptic future defeated 'Webb', undoing the changes, and thus, allowing Falerin to become the God of Evil and Eldron to be born, just as it had been in the original timeline. Eventually the shadow corrupted the world, finishing the spread of undeath that the Brilhado had already started, but also instructed the Necromancer to use the Flecks to empower himself and to subjugate his reality and others.

Powers and Abilities: Superhuman Physical Characteristics, Self-Sustenance (Type 1, 2, and 3), Immortality (Type 1, 2, and 8: Defeating him will only banish him back to his origin point in the Shadow Universe), Reactive Evolution, Adaptation, Statistics Amplification, Light Manipulation, Darkness Manipulation, Soul Manipulation, Teleportation, Power Bestowal, Corruption, Portal Creation, Reality Warping (Is able to change past events within a given timeline. Is able to alter specific aspects of a given timeline so that an individual would have never learned a specific technique or gained a specific power or status. Tholeon Webb was able to alter the timeline so that Falerin Ardendor had never reached the status as the Caelestian God of Evil and that Eldron had never existed). Spaceflight, Clairvoyance, Absorption, Acausality (Type 1 and 2. Only one version of him exists throughout time), Dream Manipulation, Non-Physical Interaction, possibly minor Madness Manipulation (Type 3: The Annunaki Truth was unable to merge with him upon their first encounter and eventually drove Truth mad), Resurrection, Shapeshifting, Can bypass Acausality (Type 1: Could still affect Eldron even though demigods such as him are supposedly resistant to changes in the past), Existence Erasure that can bypass Acausality (Type 3) (Can destroy something outside of time resulting in an undoing of its existence. Can utilize Uncreation which erases something to a degree where that object had never existed at any point in space and time), Memory Manipulation (Total uncreation of an object also erases the object from memories), Creation (Is able to uncreate the nonexistence of something), Time Manipulation (All Uncreation involves chronomancy), Matter Manipulation (Incomplete Uncreation will tranform a host into uncreation energy and "bizzare matter"), Poison Manipulation ("bizzare matter" that sometimes remains after the uncreation of an object, is poisonous to both body and mind), Spatial Manipulation (Incomplete Uncreation results in "bizzare flecks" which can break down the boundaries between realities) Memory Manipulation (Total uncreation of an object also erases the object from memories), Necromancy, Death Manipulation, Non-Corporeal, Mind Manipulation (Can confuse his opponent into attacking themselves. Is capable to controlling the actions of his minions). Resistance to Sealing (Unaffected by the seals that bound the entire Shadow Universe), Status Effect Inducement, and a large variety of effects including Statistics Reduction, Damage Reduction (Includes having his damage being set to zero), Fear Manipulation, Sleep Manipulation, Attack Reflection, Pain Manipulation, Empathic Manipulation, Blood Manipulation, Elemental Manipulation (Immune to Prismatic Burn which does omni-elemental damage), Paralysis Inducement, Mind Manipulation, Disease Manipulation, Transmutation, Probability Manipulation (Unable to be applied with reduced luck), Petrification, Poison Manipulation, Soul Manipulation, Life Manipulation (Immune to The Cold), Duplication, Void Manipulation (Immune to omni-elemental effects which includes void), and Absorption (The Annunaki Truth was unable to merge with him upon their first encounter).

Attack Potency: Universe level+ (Mentioned to be capable of destroying the entire universe, defeated Falerin Ardendor and scattered the fragments of his being across the living world. Claims to be a transelemental and transdimensional shadow).

Speed: Possibly Omnipresent (Stated to be everywhere and everywhen)

Range: Universal+ (Is capable of effecting events at any given time within any timeline).

Intelligence: At least Gifted (Posed as numerous figures throughout history such as St. Mohrred, a priest in the forest well to the north of Minister Bree-Ha's region and numerous others seemingly without ever revealing his true identity).

Note: Not to be confused with the Mysterious Stranger that appeared in DragonFable for they are completely different entities despite at one point having the same names.

Retrieved from "https://vsbattles.fandom.com/wiki/Erebus_(AEverse)?oldid=6206505"
Community content is available under CC-BY-SA unless otherwise noted.