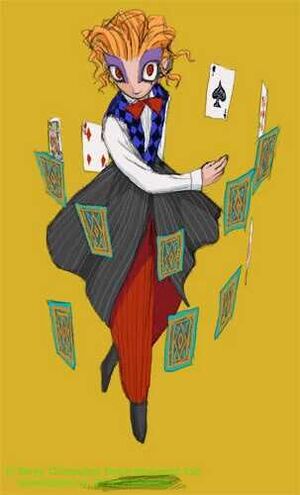 Epros is a protagonist of Okage: Shadow King. Originally known as Phantom Evil King, he was the second to last Evil King that Ari had to face. After his defeat, he fled to the Highlands where he confronted Ari and his companions, asking to join in their adventure in order to fully understand Ari's power. Epros is very mysterious, speaking only in rhyme and keeping his true motivations secret.

Attack Potency: At least Multi-City Block level (Comparable to Rosalyn, far superior to Evil King Chairman who was stated to possess enough power to incinerate an entire building) | Large Star level (After Beiloune classified him to reach his full power, Epros could fight near end game Ari and he could fight Beilone himself after the later classified himself with the full power of Classification)

Standard Equipment: Magic Cards (J of Diamonds, Q of Hearts, K of Clubs and A of Spades), Armor (Dazzling Tux and Conjurer Tux)

Weaknesses: Fire based attacks, He is not a Deviant on the level of Ari so his resistances aren't as high.

Retrieved from "https://vsbattles.fandom.com/wiki/Epros?oldid=6080987"
Community content is available under CC-BY-SA unless otherwise noted.