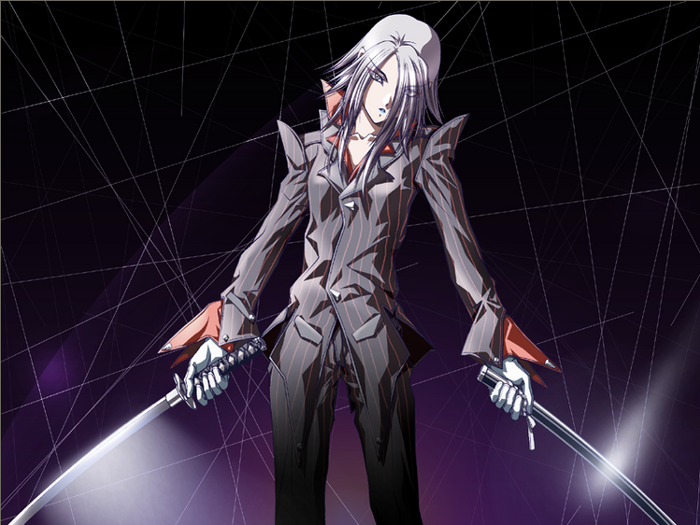 A mysterious stranger appearing in unexpected places. A person wrapped in mysteries.

Gender: Biologically Female, but it is implied they Identify as Male

Powers and Abilities: Superhuman Physical Characteristics, Sword Mastery, Martial Arts, Cyborgization (Almost completely full), Vector Manipulation (controls the vectors to direct all incoming from them), Hacking, Fungus Manipulation, Insect Manipulation (The hacking techniques used in the series often take such a form in the digital world), Creation, Weather Manipulation, Psuedo-Time Stop via Server Acquisition, BFR (As one of the top Admin of Babylon, they should be able to reorient cyberspace to displace opponents similar to Ea. In addition, they should also be able to displace their targets across time via the Ashur program), Forcefield Creation, Mind Manipulation, Reality Warping, Time Manipulation (As someone with extreme control over Babylon, they should be able to control the Ashur program to manipulate time in various ways), Telepathy, Soul Manipulation, Spatial Manipulation, Information Manipulation, Technology Manipulation, Data Manipulation, Existence Erasure, Sealing (can seal her targets in storage devices such as exabyte crystals), Immortality (Type 9. Should their body ever die, their Shadow Null will continue to exist as an information ghost and be restored from their Enigma Record. On top of that, even if they die or are erased, she will still exist in her Meta form), possibly Causality Manipulation (As an admin, they should be able to reverse causality along with time using the Ashur system), Law Manipulation | All previous abilities on a higher scale, Omniscience, Omnipresence, Regeneration (High-Godly), Immortality (Type 8 and 10. Reliant on information. Even if she is erased, she can simply restore herself and reconstruct herself.), Duplication (Can copy their information freely to clone themselves), Transformation (Able to freely reconstruct herself on her wims), Large Size (Type 11), Beyond-Dimensional Existence (Type 2), Acausality (Type 5)

Attack Potency: Wall Level (Can bisect people, and is far higher than most of the other IC due to her almost complete Cyborg nature. Took out a top tier Babylon avatar in a single hit), Far Higher via Hacking Techniques. High Hyperversal via Weather Manipulation (Completely Erased Marduk to a point that they would have been unrestorable had they not been prepared ahead of time. Wiped out almost all of Babylon). Can Bypass durability in various ways |  Hyperverse level (Exists in a hierarchy of infinite lower layers, and an uncountable number of higher layers. Each layer is equivalent to at least 12 dimensions.) Varies via navigating the Hierarchy. (Should be able to move up and down the hierarchy, moving into higher and lower layers to increase and decrease in power. This process can be repeated an almost endless number of times) | High Hyperverse level (Exists in a hierarchy of infinite higher and lower layers, functioning the same as Mutsuki's hierarchy.) Varies via navigating the Hierarchy | Outerverse level (In meta-form she is above a complex structure with infinite layers with dimensional-like difference between them and exists on a level where concepts of time and space are meaningless)

Speed: At least Supersonic, Possibly Speed of Light (Comparable to Incarnated HE) | Unknown, Likely Immeasurable (Despite being alive, they could keep up with shadows in combat) | Omnipresent

IC (Imaginary Children) - A new kind of human with altered perception. For IC the virtual world is more real than reality, and reality is no more than an illusion. In addition, the IC possess very high intelligence and computational abilities, which help them to work directly with information (they perceive the world more as a set of information, making it easier to take the next step and go to the meta-level). As a result of their altered perspective, they can naturally distinguish if the world they perceive is real or not 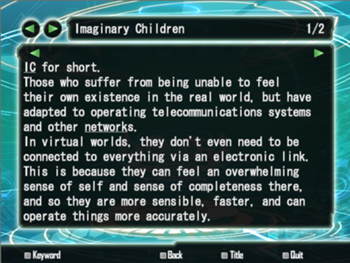 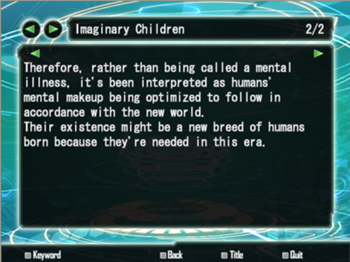 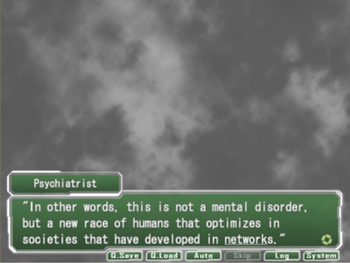 Biocomputer: Due to the A special chip built directly into the brain Enlil is like a living computer. She needs no additional devices for digital data processing and networking. However, it also makes her vulnerable to viruses, in addition there is a very real danger of directly hacking her brain.

The Great Deluge: A Collection of Viruses that takes the form of massive storms and floods, mirroring the great flood of Babylonian mythology. It is an attack meant to wipe the world clean, carrying the wrath of Enlil against the world that wronged ICs, and functions as a declaration of war to change it. Enlil used it to kill Marduk, and destroy the infinitely layered structure of Babylon. Its mass destruction erases or destroys everything in its path, ignoring all defense, and preventing regeneration or restoration.

Information blasts: Capable of creating powerful information blast that attack the enemy. This attack is purely informational, rendering any tangible ways to protect useless. These attacks can take various forms depending on the preference of the one using them, or a needed modification for a given senerio

Barriers: Enlil can create information-based barriers that can protect her against similar attacks, easily withstanding various forms of attack at once. It is almost impossible to bypass without far superior information manipulation. Enlil has the ability to form a second barrier in the form of a shield, which has a higher durability and is even harder to bypass, but as a trade off that it does not cover as much of them.

Admin Access and Rule Establishment: The ability to set up and establish rules for a given area, domain, or microcosm, they have gained admin privileges in. The rules can be anything as basic as limiting the access to an area, or disabling people's abilities. More complex rules can be used to set up the rules of the MMO world of Babylon, and creating short cuts to use usually complex abilities at an easier rate. The more complex ones usually require preparation and set up ahead of time. There are varying levels of admin privileges for a given area, and it is rare for an attacker to gain the complete control over an area. It is more common for them to use their hacking to be able to ignore the established laws, such as accessing restricted areas, or be able to establish temporary and basic rules. The rules carry over between multiple planes of existence. Enlil's hacking abilities are good enough that they should usually gain access very shortly after the start of a battle unless the security for an area is particularly high

Imaginary Vision - The ability to see objects from the real world, as a collection of a variety of fields and energy outside the visible spectrum. With it you can see things which are invisible for normal human vision. 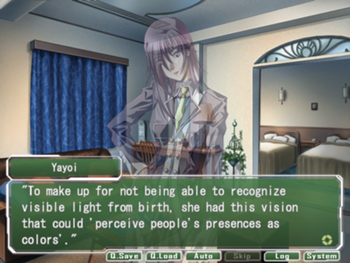 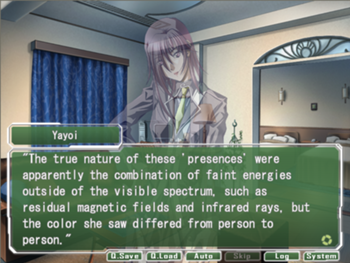 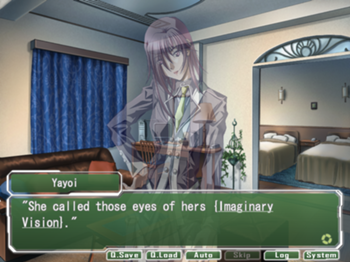 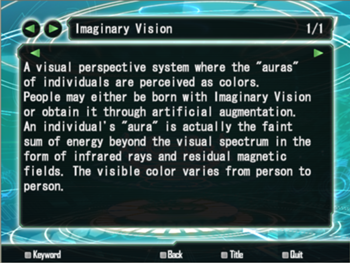 Cyborg: Most parts of her body have been replaced with cybernetic prostheses, which give her superhuman strength, speed and agility, as well as extremely heightened senses. While most IC have some form of cybernetic enhancement, Enlil's almost complete conversion makes her far superior to them. 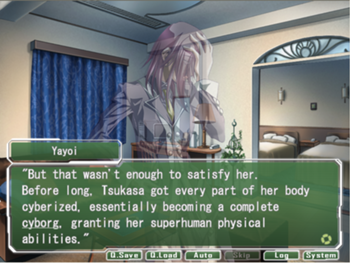 Logging-In and Logging-Out: The ability to navigate the infinitely layered hierarchies of I/O. By "logging in" they move to a lower version of themselves, or to a lower layer. By "logging out" they move to a higher version of themselves, or to a higher layer. This allows them to move up and down the various hierarchies, as the actions can be repeated an infinite number of times, in either direction. The hierarchies come in various forms and from various sources, but the principle is always the same.

Gods (Magi) The Gods' Profile (Enlil was in Mutsuki's Hierarchy)