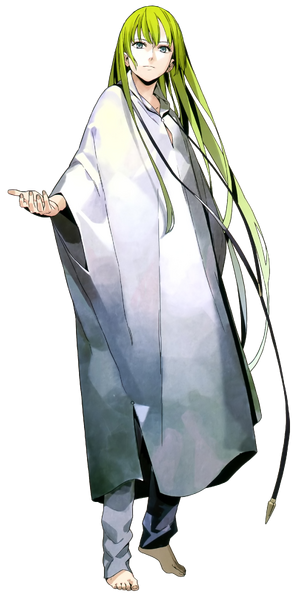 Enkidu is the "False" Lancer-class Servant of a Wolf in the False and True Holy Grail War in Snowfield.

It is one of the oldest heroes described in the "Epic of Gilgamesh" as well as one of the strongest Heroic Spirits in human history. A weapon manufactured by the gods that could "transform into anything", with combat power roughly equal to Gilgamesh in his prime, created for the sole reason to get Gilgamesh back under the control of the gods. After their battle that lasted several days, Enkidu became Gilgamesh's first and only friend, and together they underwent many adventures, but it ultimately lost its life as divine punishment for enraging and humiliating Ishtar by defeating the Bull of Heaven, Gugalanna.

Powers and Abilities: Superhuman Physical Characteristics, Has supernatural spatial awareness that allows him to detect Gilgamesh and recognize him from extreme distances as well as the location, direction, and flow of water from how it "caresses the land", Regeneration (Low-Godly, Can constantly regenerate for as long as its consciousness remains and Earth has magical energy for him to use), Immortality (Type 1, 3, 8, and 9. Enkidu does not age and will constantly regenerate for as long as the Earth has magical energy. In addition, he can regenerate from his soul which exists in a higher dimension), Statistics Amplification with Transfiguration, Damage Boost with Enuma Elish (Increases its power in response to destructive deeds committed by the targets towards the planet or humanity), Energy Projection (Can unleash bursts of magical energy from his hands as medium ranged attacks), Chain Manipulation (Can produce, control and become the chains that Gilgamesh named after him and use them as weapons), Earth Manipulation and Danmaku with Age of Babylon (Can freely absorb, shape, and manipulate clay to use as weapons with power comparable to Gilgamesh's Gate of Babylon), Size Manipulation (Can make himself grow by absorbing more clay), Shapeshifting (Due to its nature as a being of clay shaped by the gods, Enkidu lacks a fixed form and can manipulate its form at will. Allowing it to transform into virtually anything, ranging from a flawed wish-granting device, a Divine Construct, Chains etc. Due to the influence of the Divine Harlot Shamhat, Enkidu usually takes on an androgynous form), Animal Manipulation (Can commune with and understand animals, who are comforted in its presence and are willing to fight for him), Plant Manipulation, Sound Manipulation (Its cries in the Animal Language can shake Heaven and Earth and distort the laws of physics, though it is unknown how it can apply this in battle), limited Wish Granting (Can become a flawed wish granting device), Supernatural Luck, Minor Fate Manipulation (Servants with B-rank Luck or higher can change their own fates to evade inevitable outcomes such as having their hearts destroyed by Gáe Bolg; Enkidu's luck varies depending on his composition), Limited Power Nullification, Servant Physiology, Portal Creation (Capable of opening Gate of Babylon without Gilgamesh), Resistance to Poison Manipulation

Attack Potency: Island level (Enkidu boasts A-rank in Strength which can be raised to A+, making them comparable to Heracles who could deflect a weakened Excalibur and destroy mountains with his blows), higher with Age of Babylon (Comparable to Gilgamesh's Gate of Babylon). Up to Planet level with Enuma Elish (Channels the power of the Counter Force to pierce the target in a single strike. It increases its power in response to destructive deeds committed by the opponent towards the planet or humanity. It was able to clash equally against Gilgamesh's own Enuma Elish even after the latter boosted its full power with the contents within his treasury) | Multiverse level+ (Possesses combat power roughly equal to Gilgamesh in his prime, and its might is described as being "far beyond human comprehension". According to Shamhat, their battle was so grand that it felt as if the world was "destroyed and created seven times”), higher with Enuma Elish

Speed: Massively Hypersonic (Possesses A-rank in Agility and can travel this fast when using Enuma Elish) | Massively FTL+ (Should be comparable to Tiamat in her Pre-Dragonoid form)

Lifting Strength: Class 25 (Enkidu should at least be as strong as King Arthur)

Intelligence: Originally living as a construct without intelligence or a soul, Enkidu's experiences with the harlot Shamhat granted him great wisdom, empathy, and intelligence. It is an immensely skilled combatant, as it is considered roughly equal to Gilgamesh in his prime, allowing it to force Gilgamesh empty his entire treasury at the cost of ninety percent of its clay, thereby forcing a draw that almost resulted in a mutual kill. Enkidu can skillfully manipulate the Chains of Heavens bearing its name, wielding them as extensions of its body, as well as utilize Age of Babylon to completely counter Gilgamesh's Gate of Babylon. Also, Enkidu and Gilgamesh were able to defeat numerous monsters, including Gugalanna, the Bull of Heaven, which was said to be the strongest Divine Beast of Sumer that not even the gods could tame.

Weaknesses: To raise one parameter to A+, Enkidu must lower two other parameters by one rank or one parameter by two ranks. It can't restore its soul or consciousness on its own, making it vulnerable to such attacks.

Enuma Elish: O Humans, Let Us Restrain The Gods Above: Enkidu's Noble Phantasm, originally meant to bind Gilgamesh to the gods, but through their friendship, it instead became a weapon to bind the heavens for the sake of humanity. By concentrating a massive amount of magical energy from Gaia and Alaya, Enkidu pours the Counter Force into itself before merging with it to transform into a Divine Construct to pierce and bind the opponent in a single strike. It takes the appearance of a spear of light composed of chains of light that rises into the sky to meet its target or descend upon them. It possesses enough power to clash equally against Gilgamesh's full power Enuma Elish. In addition, its power is raised in proportion to the deeds perpetuated by the target against humanity, being especially effective against foes like the Beast-class Servants who are designed to exterminate them. Enuma Elish can also take the appearance of the Chains of Heaven that Gilgamesh named after him, as seen when utilized by Kingu in possession of Enkidu's body it was able to bind Tiamat for a period of time.

Magic Resistance: An innate ability that grants protection against magical effects. Unlike the Resistance effect that merely rejects Magical Energy, this ability cancels the spells altogether. Due to its A-Rank in this skill, Enkidu is virtually immune to all but the most powerful and ancient spells, while the effects of other magical attacks against it are heavily reduced. However, Enkidu's rank in this skill is dependent on its Mana parameter.