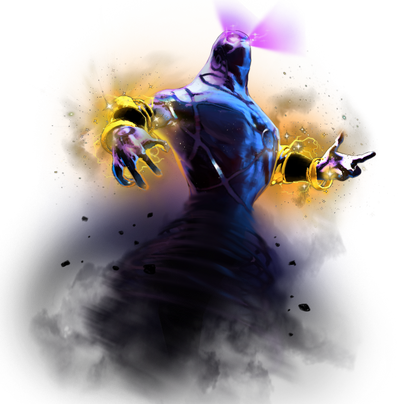 Nothing is known of Enigma’s background. There are only stories and legends, most of them apocryphal, passed down through the ages. In truth, Enigma is a mystery for whom the only true biography is description: he is a universal force, a consumer of worlds. He is a being of the void, at times corporeal, other times ethereal. A beast between the planes.

There are stories that say he was once a great alchemist who tried to unlock the secrets of the universe and was cursed for his arrogance. Other legends tell that he is an ancient being of strange gravity, the abyss personified—a twisted voice from out the original darkness, before the first light in the universe. And there are older legends that say he is the first collapsed star, a black hole grown complicated and sentient—his motivations unknowable, his power inexorable, a force of destruction unleashed upon existence itself.

Classification: Fundamental of Gravity, Manifestation of the Void and Darkness

Attack Potency: Solar System level (Should be comparable to Io and Keeper of the Light), likely higher

Speed: Likely Massively FTL+ (Should be comparable to Keeper of the Light), otherwise Nigh-Omnipresent

Durability: Solar System level (Should be comparable to Io and Keeper of the Light), likely higher

Intelligence: High (Enigma is extremely cunning and manipulative, and has a vast amount of alchemical knowledge, having created and hidden dozens of false alchemical journals detailing the exact method in which to summon him only for him to overpower his summoner and enslave them, along with stealing any powerful weapons they have created for his own personal use)

Weaknesses: Enigma has a limited supply of mana with which to cast spells, his spells have cooldown periods, during which time they cannot be cast (Both are highly exaggerated in-game for gameplay balance purposes)