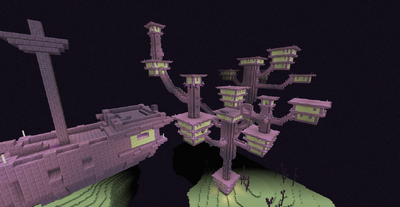 The End Cities are the only inhabited places in the End, an alternate dimension to the Overworld. They are occupied by the Endermen, a mysterious alien kind who travels to the other dimensions at night and comes back when day breaks. They appear to worship a being of immense power; the Ender Dragon.

Tier: High 8-C for Endermen, at least 8-B, possibly Low 7-C for the Ender Dragon

Civilization Type: Universal Civilization (Possess The End as a whole, which is an infinite sized universe)

Classification: Agglomeration of all Endermen

Age: Unknown (Existed before the Strongholds, which are some of the most ancient structures in the verse)

Population: Infinite (Endermen are uniformly spread through all of the End, which is infinite)

Territory: The End, although they are present in lesser numbers in the Overworld and the Nether

Technology/Abilities: Most of the civilization is able to Teleport, their technology and their own beings can defy gravity, have access to flying ships, capable of creating magical artifacts such as the Ender Chest (A chest able to store items in a pocket dimension accessible from any universe) or Ender Crystal

Attack Potency: Large Building level for Endermen (They are superior to zombies and can harm one another). At least City Block level, possibly Small City level for the Ender Dragon (It is able to easily bulldoze tons of metal just with its sheer presence)

Industrial Capacity: Unknown (They have never been shown actually constructing their ships or buildings)

Military Prowess: Possesses an infinite amount of Endermen ready to battle, alongside a more limited but still endless amount of ships

Weaknesses: Endermen are weak to water and are forced to retreat back to the End when daytime comes. Unlike the Endermen, the Ender Dragon cannot travel to other worlds

Retrieved from "https://vsbattles.fandom.com/wiki/End_City?oldid=6616093"
Community content is available under CC-BY-SA unless otherwise noted.