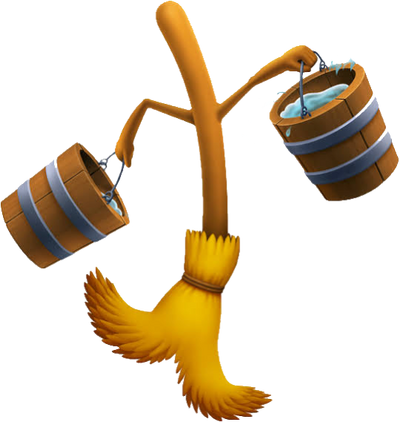 A Broom is brought to life by Mickey Mouse so that it can do his work instead. The plan goes by smoothly until Mickey falls asleep and wakes up hours later once the building is flooded. He tries to stop the broom but it does not work, and then grabs an ax and chops the broom into pieces. From the two halves, as well as the scattered splinters, an entire army of water-carrying brooms arises, and the entire room is soon filled with water. Eventually, Mickey's mentor Yen Sid comes and ends the chaos.

Classification: Broom given life under a spell

Intelligence: Mindless (Can only follow simple commands which have to be properly instructed to it, and doesn't stop following them)

Retrieved from "https://vsbattles.fandom.com/wiki/Enchanted_Brooms_(Fantasia)?oldid=5861082"
Community content is available under CC-BY-SA unless otherwise noted.