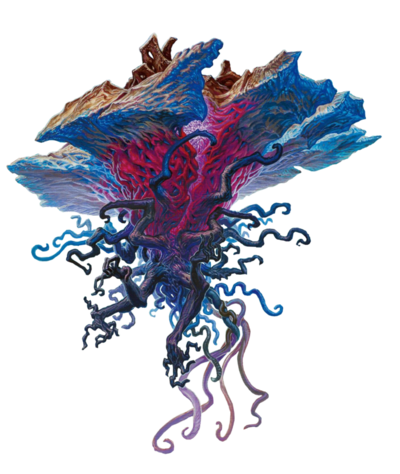 Emrakul is the greatest of the three Eldrazi titans, horrible Lovecraftian monstrosities born in the space between planes, the Blind Eternities. These beings feed on entire universes for sustenance, leaving nothing behind except empty husks of a reality. Each of the three Eldrazi titans has a lesser lineage they use as sort of a "digestive system" to speed up the consumption of a plane; usually of its life forms.

The Eldrazi have a huge difference in power level, completely dependent on whether or not they are in a bound state or an unbound state. They were once sealed by three old planeswalkers (Ugin, Sorin, and Nahiri) using a complex system of colorless magic and hedron matrices. In the end, these three godlike heroes were not able to destroy the Eldrazi but simply seal them away on Zendikar, sacrificing that plane for the good of creation.

Name: Likely incomprehensible, or simply doesn't have one, Referred to as "Emrakul" by the inhabitants of the multiverse

Gender: Referred to as female by the inhabitants of Zendikar, but is genderless in truth

Attack Potency: At least Multi-Solar System level, likely higher (Emrakul and the other Eldrazi titans are stated to be able to wipe out entire stars with only the shockwaves created by their awakening, Capable of devouring entire planes such as Mirrodin, which contains five suns. Kruphix, the eldest and most powerful of Theros' gods, feared that should the Eldrazi set their sights on his plane, he and the other gods would be entirely unable to prevent its destruction). Ignores conventional durability (The Eldrazi are able to turn any and all matter to dust with their mere presence as well as cause the fabric of space-time to collapse) | Unknown, at least Low Complex Multiverse level (Vastly superior to pre-Mending Planeswalkers such as Ugin, who fought on par with Nicol Bolas. According to Ugin, the Eldrazi as they are perceived are merely their shadows cast down from higher dimensional space.)

Speed: Usually only move at slightly superhuman speeds, though the Eldrazi can technically move at any speed they wish | Immeasurable

Lifting Strength: Immeasurable, as the Eldrazi can bend physics to their will

Striking Strength: Unknown (The Eldrazi rarely attack, but their mere presence turns matter to dust and the energy stored within into food that the Eldrazi feed upon)

Durability: At least Multi-Solar System level, though likely far harder to actually destroy due to their abstract nature | Unknown, at least Low Complex Multiverse level (The Eldrazi are beings that thrive in the nothingness of the Blind Eternities, and it is implied that even if every last trace of the multiverse was wiped out, the Eldrazi would still "exist". Therefore, trapping them appears to be more effective than attempting to eliminate them)

Range: At least Multiversal+, as they can attack any plane in existence through the Blind Eternities

Weaknesses: None notable, other than one can strategize against them because the Eldrazi don't think like mortal minds (they were tricked by the three planeswalkers into coming to the plane of Zendikar, where they were then sealed away using a complicated series of hedrons and different forms of magic)

Feats: Born in the primordial chaos between planes, named Magic's "biggest threat to the multiverse". In a bound state, obliterated a stronghold simply by drifting by. After they were sealed, eventually the myths around them and their horrible power became twisted and the three titans became gods worshiped by the denizens of Zendikar. Emrakul became Emeria, the goddess of the skies and light.

Emrakul, the Promised End
Add a photo to this gallery