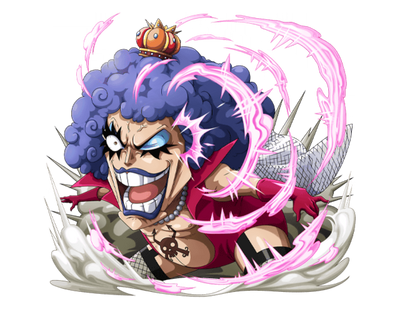 Emporio Ivankov is known as the "Okama King", and an officer of the Revolutionary Army led by Monkey D. Dragon.

He was introduced as an vanished prisoner of Impel Down, hiding with other "vanished" inmates who were hidden between the 5th and 6th levels of the prison in his "Newkama Land". It was not until Monkey D. Luffy arrived that Ivankov was convinced to assist with the rescue of Portgas D. Ace and to help Luffy escape the prison . Ivankov went with Luffy and Jinbe to Marineford, where they fought their way to try and rescue Ace.

After the war, Ivankov went to his home at Momoiro Island, he met Sanji, who had previously been sent flying there by Bartholomew Kuma, and had his underlings train him for the duration of the time-skip.

Gender: Male normally, but can also change into a Female

Attack Potency: At least Small City level, likely higher (His strength is great enough to allow him to fight on equal terms with the completely transformed Pacifista, Bartholomew Kuma. He was able to easily defeat Sanji, one of the Straw Hats' top fighters. Upon encountering Crocodile in Impel Down, he also mentioned that he could defeat the former Shichibukai if necessary. As one of the commanding officers of Dragon's Revolutionary Army, Ivankov should be at least this powerful, capable of going toe-to-toe with Vice-Admirals and similarly powerful opponents)

Speed: At least Massively Hypersonic+ (Managed to evade Magellan's poison attacks, and could keep pace with Bartholomew Kuma for an extended period)

Range: Extended human radius due to size, at least one hundred meters with winks

Intelligence: High (Should be very intelligent due to Dragon acknowledging him by making him into an officer of the Revolutionary Army. Ivankov helped numerous inmates from Impel Down escape into a hidden section in the prison, where they lived in secret until eventually escaping, though Ivankov is often too focused on getting the attention of others that it leads to recklessness)

Weaknesses: Ivankov is easily surprised and is often reckless. He sometimes becomes arrogant in the heat of battle, which has him drop his guard. Due to this, he lost to Magellan one-on-one, and was almost killed by Akainu. Standard Devil Fruit user weakness

Newkama Kempo: A fighting technique from the Kamabakka Kingdom, that Ivankov has likely mastered.

Horu-Horu no Mi (Horm-Horm Fruit): With this Devil Fruit, Ivankov can change the hormones within his, or other bodies. He has the ability to alter a person's physical form, such as drastically increasing the size of his head, and having the ability to change the gender of others.