The Adeptus Mechanicus and it's Collegia Titanica make use of some of the most devastating ground weapons ever developed short of the Ordinati themselves, the immense Battle Titans. Even the smallest class of these mighty engines of war is a walking bastion in it's own right, yet all classes of Titan pale in comparison to the mighty Emperor Titan.

As much a walking temple dedicated to the worship of the Omnissiah as a walking fortress dedicated to the smiting of His foes, the Emperor Titan is the most feared and revered of all the Mechanicus' God-engines. Only the most senior and battle-hardened Princeps are allowed to control these mighty war machines, and their sheer size and defense frequently turn them into the dedicated mobile headquarters of their Titan Legion's Grand Masters.

Most Legions cannot field more than 3 or 4 of these behemoths in a given campaign, due to their design schematics having been lost to the sands of time. As such, every Emperor Titan currently active is a venerable relic in it's own right, and a veteran of countless battles along the millennia. However, much like the Imperium itself, once they are fully engaged, they are unyielding, relentless and nigh-unstoppable.

The Emperor Titan is split into two classes: the Imperator and the Warmonger. The Imperator is a more general-purpose assault platform, while the Warmonger is a dedicated to long range fire-support unit meant to bombard and crack open heavily fortified targets. Which of these variants was designed first has been lost to the mists of time, yet both are equally deadly and worth entire armies on their lonesome.

Age: Varies, up to tens of thousands of years (The oldest of them have been around since the Age of Strife at least)

Powers and Abilities: Superhuman Physical Characteristics, Inorganic Physiology (Type 2), Energy Projection, Forcefield Creation (The Titan's Void Shields function by sending any incoming projectiles into the Warp, although anything else that manages to get close enough normally, like vehicles, can cross the shield without difficulty. However, the void shields operating at maximum capacity are capable of preventing everything from penetrating their perimeter, even radiation or the rain), BFR and Durability Negation (Via it's Void Shields or the Vortex Warhead, a missile capable of tearing open a hole from realspace into the Warp, which also tears anything it touches apart), Heat Manipulation (Via it's weaponry), Plasma Manipulation (Via Plasma Annihilator), Light Manipulation (Via Laser weaponry), Weapon Mastery (Each Titan crew is trained to elite standards in the operation of all the various weapons of their walkers, and Emperor crews are selected among the best crews out of all Titans in a given Legion), Explosion Manipulation (Via various weapons), Homing Attack (Via missile launchers), Enhanced Senses (The Emperor's elevated position gives a field of view that dwarfs that of an average human, and it also possesses likely hundreds of other cameras, sensors and other equipment that allow it total situational awareness. It also possesses hundreds of Auspex scanners, which allow detection of motion, gaseous and energy emissions, through various means, such as heat, radiation, seismic activity and more), Fire Manipulation (Via Inferno Gun), Teleportation via Dimensional Travel (Although exclusive to the Legio Astorum, or Warp Runners, Warlords are capable of teleporting into battle nigh-instantaneously via the Warp), Large Size (At least Type 1, possibly Type 2; Emperors are usually consistently depicted at a height of 54 meters, however sizes of 43 and all the way to 140 meters or so have been reported as well), Berserk Mode (The machines spirits of Titans are often some of the most complex and temperamental in the entire Imperium, their consciousness vast and war-like, befitting their nature. However, should their Princeps ever lose control and end up with their mind swallowed by the God-machine, the Titan moves and acts on it's lonesome, having entered a berserk state that will not stop until all it's enemies are dead), Limited Madness Manipulation (Type 3; the Imperial Guard regiments fighting alongside Titans that mount Volcano Cannons can be driven to madness, as the crystals required to create the weapon are harvested from the final resting place of thousands of heretic psykers buried under lave and rocks, with their death screams still echoing with each firing of the weapon. The crew however is completely unaffected), Limited Power Nullification (With Void Shields at maximum power, even Warp-based teleportation is incapable of breaching the area around the Titan), Resistance to Corruption (Although many Titans have fallen to the temptations of Chaos, most of them possess protective wards and the sheer strength of will to defy exposure to a considerable level), Mind Manipulation (Titan consciousnesses are usually far more vast that the mind of an ordinary human, and their Princeps have to be especially trained to handle the strain of controlling them. As such, they possess a great degree of protection from mental attacks, as their foes would have to deal with the Titan's massive mind) and Soul Manipulation (Although what and if machine spirits truly exist as the Adeptus Mechanicus teaches is unknown and contested, Titans, despite having distinct personalities and minds, do not have a true "soul")

Attack Potency: At least Multi-Continent level (Emperor Titans are among the mightiest land weapons that can be fielded by the Imperium, short of literal moving fortresses and Ordinati. They are frequently compared to small void ships in armament, and should therefore be capable of this, as the armament of even a single small void ship should equal that of a single shot from a battleship. Their Plasma Annihilators are of a far higher caliber than the Sunfury pattern, which was originally designed for the broadside batteries of void ships. They are also far superior to the Warlord-class Titan, and can strip the Void Shields from said Titan in a single salvo of their Hellstorm Cannon)

Speed: At least Superhuman movement speed (Slower and even more cumbersome than the Warlord-class, yet it's sheer size should grant it at least this kind of pace advantage), at least Hypersonic attack speed for most weapons (Most weapons that can be mounted on the Titan are at least comparable, if not outright superior to Bolt rounds), Speed of Light with Laser weapons

Lifting Strength: Likely at least Class M (It's sheer size should make it far above the maximum estimates of a Warlord's weight, and it can not only move around said weight, but also use it's weapons to ram other Battle Titans to the ground)

Striking Strength: Likely Multi-Continent Class (Although it possesses no true melee weapons, the Titan can still use it's weapon arms to knock enemy Titans to the ground, and it's legs are so massive they can easily crush said Titans)

Durability: At least Multi-Continent level (Emperor Titans are equipped with at least 12 Void Shield Generators, whcih are so powerful even dozens of Warlord or Reaver-class Titans need to focus on a precise, specific point and overload that particular section of the Void Shield, having no hope of blasting through otherwise. Even without their shields, Emperor Titans have among the toughest and thickest armor plating of any ground vehicle)

Range: Several tens of meters melee range, at the very least tens of kilometers weapon range (The Quake Cannon alone can shoot at targets 24 kilometers away with acceptable accuracy), thousands of kilometers with teleportation and Vortex Missile (The missile is a fully capable ICBM capable of striking nearly everywhere on the planet)

Intelligence: Varies, but usually at least Gifted (Titans are almost always ancient war machines with centuries or even millennia of service in the most horrendous battlefields imaginable, and each time their Princeps dies or is absorbed by them, the mind waves will yet persist in the Titan, potentially giving it all the skill and martial prowess of it's users)

Weaknesses: Far slower in comparison to all other Titans. Require their crews to stay alive to continue working in most circumstances, and said crew is far more vulnerable both mentally and physically than the Titan itself.

A battle between Heretic and Loyalist Titans

An Imperator walking alongside a Warlord and a Warhound 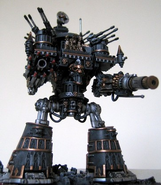 A Warmonger-class
Add a photo to this gallery

Retrieved from "https://vsbattles.fandom.com/wiki/Emperor_Titan?oldid=5829051"
Community content is available under CC-BY-SA unless otherwise noted.