VS Battles Wiki
Register
Don't have an account?
Sign In
Advertisement
in: Tier 8, Tier 8-B, Re:Zero kara Hajimeru Isekai Seikatsu,
and 25 more 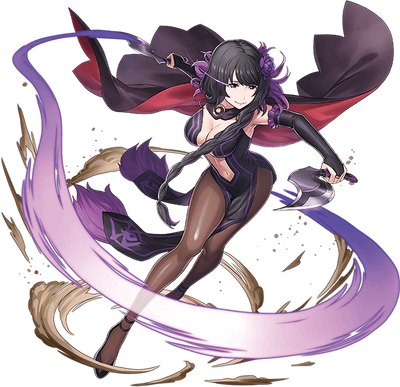 Elsa Granhiert was born in the extremely cold country of Gusteko. The divide of wealth in Gusteko was fierce, and it wasn't uncommon for lower-class children to be abandoned. Elsa was one of those children who was abandoned, never knowing her parents, having to drink dirty water to survive. Elsa spent her days stealing objects, and threatening people, she never questioned why she was alive or what happiness was. A shopkeeper Elsa stole from caught her and tried to rape her.

After having her clothes ripped off, Elsa contemplated whether the cold would kill her before the shopkeeper did anything, and her hand happened to pick up a shard of glass. She killed the shopkeeper, but felt nothing about it. What she thought about, however, was how warm blood and guts are. Elsa thought that if there was any happiness in the world, then it is in the warmth and beauty of forgetting the cold, from birth she had nothing, and now she had this, the first definite happiness she had ever found.

Powers and Abilities: Superhuman Physical Characteristics, Immortality (Types 3 and 7; Elsa becomes an undead after reaching the limits of her regeneration), Regeneration (High-Mid; Regenerated after most of her body was shattered to pieces), Expert Sword Wielder (Has overwhelming combat intuition and excellent technique), Magic Negation via her cloak (Can ward off magic for a single time), Acrobatics (Is extremely mobile, being able to attach herself to the ceiling, jump from there to the corridor wall, to the ceiling again, and then to the floor, all however she pleases), Enhanced Senses (Has frightening eyesight), Reactive Power Level (Gets more powerful after surviving near death experiences, and every technique she witnesses in battle doesn't work on her a second time), Stealth Mastery (Sneaked up on Subaru and Emilia without them noticing. Superior to Meili who can erase the sound of her footsteps), Self-Sustenance (Type 3), and Resistance to Pain Manipulation (Elsa feels neither pain nor fatigue, allowing her to continue fighting without limit)

Speed: Supersonic (Threw her knife so fast that it left even the sound of ripping the air trailing behind. Garfiel whom she is comparable was able to deflect it. Explicitly stated to be able to surpass the speed of sound)

Stamina: Limitless (She feels neither pain nor fatigue, allowing her to continue fighting without limit)

Range: Extended melee range, several to tens of meters with her White Blade and by throwing her iron skewers and kukri knives

Standard Equipment: Kukri blades, a magic negating cloak and iron skewers she uses as throwing weapons. Her cloak negates the magic of an attack, but only once. The heels of her boots also double as blades

Intelligence: Skilled combatant, she has been a seasoned assassin for a long time, and has fought numerous other skilled opponents. She possesses a keen intuition that helps her out in combat such as knowing her opponents position despite her sense being interfered with. Every technique she witnesses in battle doesn't work on her a second time.

Weaknesses: Her regeneration isn't without consequence, after taking numerous fatal strikes, Elsa will become an undead solely intent on killing anything in her path.