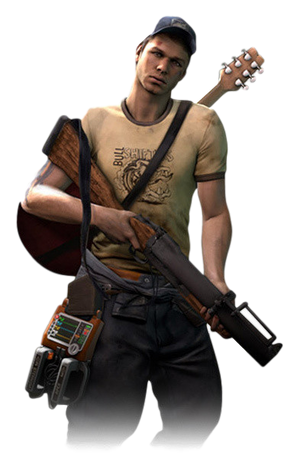 Ellis (also known as El) is a mechanic with a love of life, a firm belief in his own immortality, and the ability to treat any setback as a fun dare to impress his friends. Born and raised in Savannah, Ellis divides up his time working at the local garage, hanging out with his buddies, and dropping by for Sunday dinners with Mom—why’d anybody want to live anywhere else?

Then the zombies had to go and spoil it. Now Ellis is looking for new things to occupy his time, and finding plenty. It turns out the zombie apocalypse is one big dare, and there’s no shortage of crazy stuff he can try to impress his new buddies.

Tier: 9-C by himself. 9-C to 9-B with firearms and Grenade Launcher

Powers and Abilities: Superhuman Physical Characteristics, Survivalism, Can tell many stories about Keith, Firearms and melee weapons proficiency, Statistics Amplification, Healing, Can struck targets with fire, Explosion Manipulation, Resurrection, Limited Resistance to Disease Manipulation (Being carriers of the infection, the survivors are complete immune to the Zombie Virus. However, they are an extremely danger to any human they find that are not immune to the virus, since they can transmit the virus to others)

Striking Strength: Street Class (Comparable to the other survivors)

Durability: Wall level (Can withstand various hand-to-hand attacks of zombies and the Tank, who can break metal doors and walls easily)

Stamina: Superhuman (Can fight with thousands of zombies in several days without any retreat)

Weaknesses: is easily distracted by anything. especially if it's something about his friend Keith or about your relationship with Zoey.