VS Battles Wiki
Register
Don't have an account?
Sign In
Advertisement
in: Tier 1, Tier 1-A, Characters,
and 32 more 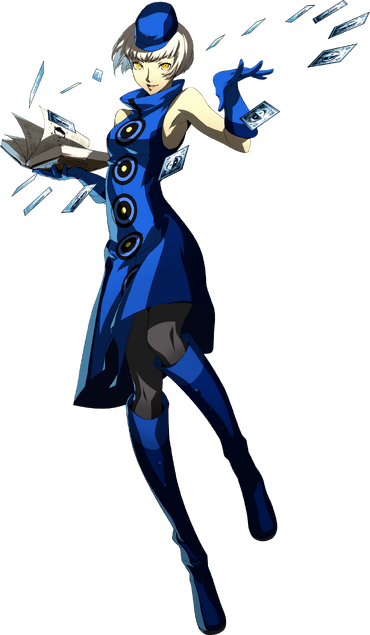 Elizabeth is the Velvet Room Attendant serving Igor during the events of Persona 3. Bubbly and carefree, she performs her duties faithfully until she falls in love with Minato Arisato. Determined to free his soul from the duty of keeping Nyx at bay, she leaves the Velvet Room to go on a journey in search of a power that can bring him salvation.

Superhuman Physical Characteristics, Martial Arts, Weapon Mastery (Cards and her Tome), Stealth Mastery, Supernatural Willpower, Empowerment, Accelerated Development and Reactive Evolution (Battle, Leveling, and Training; Physical Stats, Magic, and Improved Resistances. (Humans are able to get more powerful after defeating strong demons or even as they are in the middle of battle, even against opponents ontologically superior to them, and are able to grow massively in strength in the span of merely a day's time or less, either through resolve, the threat of death, or training, or the bonds they hold dear), Durability Negation, Healing Nullification, Immortality Negation (Type 2, 3, and 7), and Invulnerability Negation (Capable of interacting with Demons, which are invisible beings comprised of data and information, the fulcrum of the entire verse proper, a concept synonymous to souls, minds, and even concepts. Even entities devoid of time and space, and nonexistent bodies such as The White can be struck down. Can completely negate their invulnerability to conventional weaponry, and the requirement of needing to be on a specific informational frequency to harm, as well as Septentriones, which require spiritual attacks to harm, and as well as killing undead beings and regenerative entities, such as Nagas and Blobs), Nonexistent Physiology (Type 2; As creations of Igor, and a resident of the Velvet Room, a nonexistent space, Elizabeth doesn't conventionally exist, existing in the state between mind & matter, only giving herself physical form upon her will), Cognition (Type 1; Scaling to Margaret, who can manipulate Kotone's inner world)

Cognitive Physiology (Archetype), Magic, consisting of: Fire, Water Manipulation, Ice Manipulation, Lightning, Earth Manipulation, Wind, Radiation, Explosion, Psychokinetic, Energy, Holy, Light, Curse, Darkness, Petrification with Petra, Gravity Manipulation and Death Manipulation. Resistance Negation and Existence Erasure (Can use Almighty Attacks, which bypass all barriers and reflectors, invulnerability, and resistances. Can even negate an opponents resistance to resistance negation with Pierce. Almighty attacks are able to hurt someone wielding the Omnipotent Orb, which bends the rules of reality to defend the user from attacks, and Reason Bearers, who are able to enforce rules into reality to protect themselves from attacks. The Megi- line of spells is capable of obliterating opponents with a light that erases them "beyond death"), Absorption (Can drain vitality and spiritual energy with Deathtouch, Spirit Drain, Life Drain, Energy Drain, and passive Absorb skills), BFR (With Omni-Dimension, sends an enemy to another realm which can kill them upon entering it), Healing, Purification and Resurrection (with various support spells), Statistics Amplification and Statistics Reduction (with Physical skills and various support spells), Damage Boost (with critical hits), Damage Reduction (with Guard), Status Effect Inducement, which includes, Empathic Manipulation (Dizziness/Nausea, Confusion, Despair and Rage), Fear Manipulation (with Evil Touch and Evil Smile), Memory Manipulation (with Makajama and Makajamaon), Sleep Manipulation (with Dormina and Lullaby), Mind Control (with Marin Karin and Brain Jack), and Petrification (with Petra), Power Nullification (With Binds), Regeneration (High-Godly; Persona-users of this caliber are capable of returning after their complete erasure, as shown when Enlil erases the combined might of SEES, the Investigation Team, and the Phantom Thieves, in-which the same exact event occurred with Yaldabaoth, yet returned)

Various Cognitive Affinities (Resistance, Invulnerability, Reflection and Absorption of Physical and Gun-based attacks, Fire, Ice, Electricity, Wind, Energy, Curse, Darkness, Holy, Mind, Light, Death, and Status Effect Inducement), Probability Manipulation, Existence Erasure, Information Manipulation, Mind Manipulation, Soul Manipulation, Fusionism and Memory Manipulation (Simply having the potential to awaken a Persona grants one a will firm enough to maintain their own existence and individuality in the unconscious world, where the concept of the ego does not exist and all individuality dissolves into oneness, with ordinary people being immediately overwhelmed by the nothingness and scattered throughout all possible worlds by stepping into it), Curse Manipulation (Like the other protagonists, he is likely able to fight and defeat White Rider, the abstract embodiment of victory and conquest whose crown assures his success in all battles and wars. Unbothered by interactions with Pisacas, which fate humans to die in the span of nine months), Disease Manipulation, Probability Manipulation, Madness Manipulation and Chaos Manipulation (Unaffected by the act of looking into Girimehkala's eye, which inflicts incurable sickness and misfortune into individuals, and by the gaze of Yakkha, which is said to inflict disease and madness), Petrification and Poison Manipulation (Can easily do battle against Basilisk and Cockatrice, both of whom turn normal people into stone simply by being touched or looked at, and have a gaze and breath so poisonous that any mortal being near them instantly dies, turning their surroundings into a desert), Life and Death Manipulation (Can fight Liches, whose presence drains the life of those who see them, and is not affected by Balor's gaze, which instantly kills enemies, and Chatterskull's laughter, which dooms whoever hears it to death, immediately stopping their heart),

All previous abilities to a greater extent. Telekinesis (Can telekinetically manipulate her tarot cards), Transmutation and Sealing (As demonstrated in the Persona 4 Arena games, in which Elizabeth transmutes a target into energy by touch, seals them into the Compendium, and ejects them after inflicting a Status Effect based on the Arcana of the card they are turned into), Power Nullification (Can dispel Labrys' illusion), BFR (Sent Erebus from the Collective Unconscious to the moon), Creation (Recreated Junpei's room in perfect order)

All previous abilities to a greater extent

All previous resistances to a greater extent, including Perception Manipulation & Disease Manipulation (Possesses Team Glasses, that ward of Izanami's fog and prevent her sickness)

Attack Potency: Outerverse level (Serves as the “Ultimate Opponent”, existing within the Monad Depths, and is the final adversary before the fight against Nyx (Persona). Grew stronger after the events of Persona Q, growing to level 99 during the events of A Family Affair, when previously Zeus (Persona Q) could possess her without resistance despite a singular level gap in strength. Flawlessly wields powerful Personas such as Satan (Shin Megami Tensei) during Velvet Blue, and Masakado (Shin Megami Tensei) who in which an aspect of him could fare against Raidou Kuzunoha The XIV (Shin Megami Tensei). Killed Niades, an aspect of Nyx during the events of Velvet Blue), higher with Willpower | Outerverse level (Noted to train excessively, Elizabeth was capable of one-shotting Erebus (Persona) with mindless ease after the events of Persona 4. Overwhelmed Shadow Operatives Aigis at full power, humiliated Shadow Labrys and a Post-Persona 4 Golden Yu Narukami was advised and admitted to fight her with intent to kill, yet lost decisively), higher with Willpower

Durability: Outerversal (Comparable if not stronger than Lavenza, who could take strikes from Yaldabaoth. Superior to Caroline and Justine, who stomped Ren after defeating the Holy Grail), higher with willpower (all Persona-users can enhance their durability through being empowered by their strength of will) | Low Complex Multiversal (Took hits from Arena Yu and Aigis), higher with willpower

Stamina: Very High. Can fight for hours on end despite the constant use of physical and magic skills, which significantly drain physical and mental stamina respectively with every use. Capable of fighting The Reaper with her magic, Persona, and skills sealed off, and bind head to toe, and was stated to nearly win that fight. Often trains with Margaret, someone comparable to her.

Intelligence: Combat Genius. Despite her cheery, inquisitive, friendly and silly behavior she is very serious and cunning when it comes to combat.

Weaknesses: None notable, will not use the Omnipotent Orb unless she believes she can handle her opponent.

Persona Summoning: The ability to summon and utilize Personas. Personas can move and attack independently of their users, allowing for concurrent attacks to be performed. They are summoned and directed through thought and instinct, and most attacks manifest just as quickly and are controlled through the same means; and it should be noted that Personas do not need to be summoned in order to use their skills. Each Persona has a unique set of statistics and elemental affinities, which also apply to their user while the Persona is equipped. The Personas that Elizabeth has access to are listed here.

Persona Skills: Personas are all able to use certain skills and spells related to the stories/mythologies of the figure they are based on. Persona-users and their Personas can use skills and spells independently of each other. These skills range from amplified physical attacks, highly-malleable elemental attacks, status buffs and debuffs, ailment infliction, passive defenses and more, can manifest instantly and with a thought, as well as affect the mind, soul, information and concept of the target. The complete list of skills that Elizabeth has access to are listed here. The skills listed below are particularly notable.