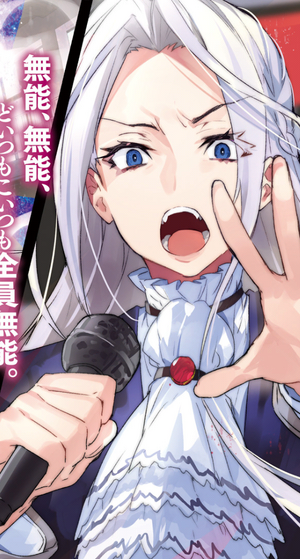 Elicia Luxverg is one of the Problem Solvers, a group of five God-Worshipping magicians that are considered to be the five strongest magicians in the world. The Problem Solvers are also the only humans to have successfully fought off the mysterious Threat despite using the older God-Worshipping Magic instead of modern Crystal Magic. Like the other Problem Solvers, Elicia's powerful magic is not just used for combat, and it's also used to support a sector of the global infrastructure. Elicia holds particular influence over on Oceania and supports garbage disposal and recycling.

Origin: Apocalypse Witch: To The Strongests of an Age of Plenty

Attack Potency: Human level | At least Small Building level (Her 15m avatar can easily kill Crystal Magicians like Marika Amaashi by crushing them or biting through their spatial vibration field and crystal armor), likely higher (Implied to be capable of creating a larger avatar depending on the environment and theorized to likely have a maximum size of 50m, mentioned to use megafloats larger than Manhattan because otherwise the avatar would easily flip them, tilted Grimnoah Academy when it entered the ship)

Durability: Human level | At least Small Building level (Her 15m avatar cannot be destroyed by Crystal Magicians, even Marika and Aine combining their lasers only knocked it off a building), likely higher

Intelligence: Above average, considered to be one of the world's five strongest magicians, organizes and controls the recycling industry at a global scale

Weaknesses: Normal human weaknesses, can only create one avatar, which can't move too far away from her | None notable

Retrieved from "https://vsbattles.fandom.com/wiki/Elicia_Luxverg?oldid=5626534"
Community content is available under CC-BY-SA unless otherwise noted.