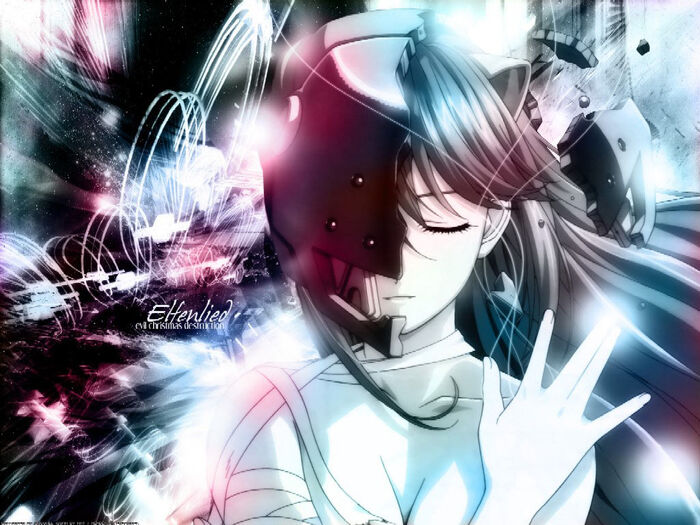 For detailed information about this series, visit the Elfen Lied Wiki.

Elfen Lied is a manga written and illustrated by Lynn Okamoto, beginning in 2002 and ending in 2005. It was also adapted into a 12-episode anime that ran in 2004, before the manga was complete.

The plot revolves around the Diclonius, a new race of mutant humans with horns and invisible "Vectors" that they can use to kill others or, in the case of the "Queen" Diclonius, Lucy, spread the Diclonius virus. Abandoned as a child and subject to abuse throughout her life, Lucy would grow from an innocent young girl to a remorseless killer, fighting against the Diclonius Research Institute and their attempts to capture her. After being shot in the head after escaping containment, Lucy was discovered by a young student, Kouta, and his cousin, Yuka, both figures from her past - but the bullet had left her damaged and fractured her identity, leaving her a harmless, oblivious shell that they named "Nyuu". With the devastation Lucy caused fresh on their minds, the Diclonius Research Institute scrambles to reclaim her.

Diclonii are typically around Small Building level and are fast enough to easily deflect gunfire, even at close ranges, and their Vectors can phase through opponents to ignore durability. By the end of the series, Lucy has grown powerful enough to cause nuclear explosions and reach her Vectors into space at high speeds.