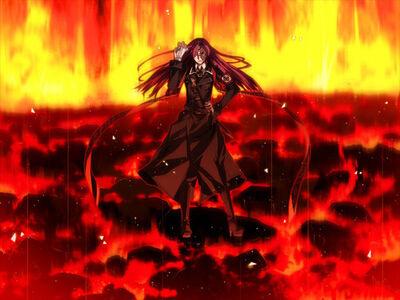 Powers and Abilities: Superhuman Physical Characteristics, Immortality (Types 1, 3, and 8. As an Einherjar she is immortal as long as Reinhard Heydrich exists.) Self-Sustenance (Types 1, 2 and 3), Regeneration (Low-Godly, High-Godly within Gladsheimr), Enhanced Senses, Extrasensory Perception (Ewigkeit users have a "third eye" which allows them to see through a person identity by viewing the color of the soul, and perceive invisible attacks such as Ren's Assiah), Soul Manipulation (Can devour souls and can attack directly the soul of her targets), Law Manipulation (Briahs are described as the implantation of a new law into reality), Reality Warping (Briah allows Ewigkeit users to impose their own desire on reality), Magic (Ewigkeit is a form of Sorcery that fuses the Soul of its user with a Holy Relic. in addition their attacks will become magical in nature), Fire Manipulation (The heat of her flames rival that of a nuclear explosion and can attack the soul itself), Regeneration Negation (Up to Low-Godly; Holy Relic's carry a poison that hinder or negate regeneration of the soul), Homing Attack (Her flames are capable of homing in and chasing down the target until they finally engulf them), Non-Physical Interaction (Holy Relics are capable of hitting disembodied souls), Spatial Manipulation, Teleportation, Energy Absorption, Summoning (Can summon her Relic from Gladsheimr), Durability Negation (Attacks of a Holy Relic user are impossible to nullify since they attack on both a physical and spiritual level), Immunity to natural poisons and diseases, Resistance to Magic, Mind Manipulation (Endured being in the presence of Methuselah) and Soul Manipulation (All Holy Relic users are capable of enduring attacks that hit the soul) | Same as before in addition to Acausality, Causality Manipulation, Regeneration (High-Godly; can regenerate from conceptual destruction), Conceptual Manipulation, Probability Manipulation, Abstract, Non-Corporeal

Attack Potency: Mountain level (Is much stronger compared to the regular members of the LDO. Her flames' power surpasses that of a nuke. Effortlessly destroyed Tubal Cain in Marie and Rea's Routes.), can bypass durability by attacking her opponent's soul | At least Large Planet level, likely far higher (Superior to boosted Wilhelm Ehrenburg who could smash through Methuselah's Jaws of Darkness) | High Outerverse level (Inhabits the same level of existence as a Hadou God)

Stamina: Limitless (Has an endless amount of souls due to her connection with Gladsheimr, allowing her to fight forever) | Limitless | Limitless

Range: At least several kilometers (Her attacks have displayed this range before), Universal with her Holy Relic and Muspellheimr Lævateinn (Her attacks are described as never missing, and will chase down their target over an effectively infinite 3-D space) | High Outerversal

Intelligence: Very skilled combatant with over 60 years of experience, capable of predicting Beatrice's movements with her eyes closed.

Weaknesses: The more people she affects with her Briah the weaker her power becomes.

Eleonore's Holy Relic.
Add a photo to this gallery