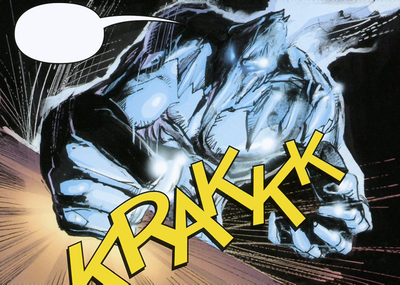 Once a Glatorian, the future Element Lord of Ice was granted his powers and transformed into an Element Lord by the Great Beings to rule over Spherus Magna. Along with the rest of the Element Lords, he turned against his former allies in an attempt to get the legendary substance of Energized Protodermis for himself, ultimately resulting in the Shattering.

Name: The Element Lord of Ice

Powers and Abilities: Superhuman Physical Characteristics, Ice Manipulation and Absorption, Longevity, Resistance to Ice Manipulation (The Elements Lords cannot be affected by the element they control)

Attack Potency: At least Island level (His elemental energies are greater than Tuyet's with the Nui Stone because the Element Lords are one with their element they control. The Element Lords can replicate the effects of a Nova Blast without draining all of their energy, and a Nova Blast could potentially destroy Metru Nui).

Stamina: Extremely high. The Element Lord of Ice's stamina should be far superior to that of a Toa as the Element Lords can replicate the effects of a Nova Blast without draining all of their energy, and the Toa Mangai fought against the Kanohi Dragon for an entire month.

Range: Extended melee range, Tens of Kilometers with his abilities (Can replicate a Nova Blast without draining all of his energies)

Weaknesses: The Element Lord of Ice is aggressive and power hungry.

Start a Discussion Discussions about Element Lord of Ice