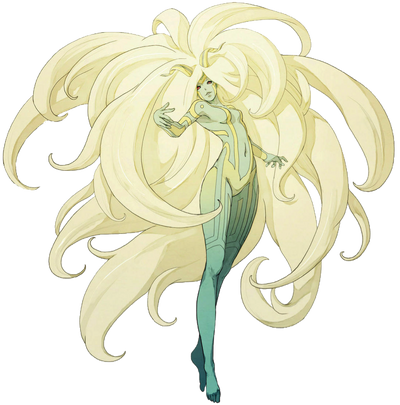 Elektricitie was an antagonist and the penultimate boss in Gravity Rush 2. She first appeared as the "Shining Girl" but later had her actual form awakened by King Cai. She was an ancient being of immeasurable power and the personification of electricity.

Long ago, the ancient royalty of Eto feared Elektricitie and her power and decided to seal her inside a crystal in the Crystal Palace within Eto.

Centuries later, shortly after Kat's victory over Kali Angel and Mayor Brahman, Elektricitie frequently appeared before Kat in the guise of a "Shining Girl," convincing her to travel to the top of the World Pillar and rescue her. Somehow able to understand her, Kat agreed and made her way to the top of the pillar, accompanied by Raven.

Eventually, following Kat's return to Eto and skirmish in the palace throne room, Elektricitie was finally released by King Cai as part of his plan to destroy the world below, having been convinced in a dream when a voice from the darkness—presumably the Destructive Force—told him to do so.

Though Raven, Yunica and Permet fought valiantly to protect Hekseville from Elektricitie, they were ultimately overwhelmed and defeated due to her frequent regeneration and replication. Upon regaining her memories as Queen Alua and returning to Hekseville, Kat confronted Elektricitie herself, but ran into the same problems as her allies, causing Cai to taunt her about Elektricitie's invincibility. Fortunately, with help from Cyanea, Kat spotted the real Elektricitie among her clones and attacked, destroying her once and for all.

Powers and Abilities: Superhuman Physical Characteristics, Electricity Manipulation, Weather Manipulation (Can call down lightning to strike foes), Inorganic Physiology and Elemental Intangibility (via being made of electricity), Regeneration (Unknown. Can reform herself from scattered electric energy), Flight, Forcefield Creation (Can create an electrical barrier around herself), Duplication (Can create several clones of herself), Astral Projection (Projected her soul to communicate with Kat)

Attack Potency: At least Large Building level (Can utilize natural lightning and match both Kat and Raven. Stated numerous times to have “the power to destroy the world below” and described as “invincible”)

Weaknesses: Her lightning can be avoided by using tall objects like a lightning rod.

Notable Attacks/Techniques: As her name suggests, Elektricitie commands the power of electricity and seems to be made from it. She can manipulate electricity to a variety of effects, using it to fly, form shields to protect herself and call down lightning strikes to attack anything in the vicinity. She can also produce clones of herself made from electrical energy, with the number of clones doubling each time she regenerates from being defeated. On multiple occasions, she appeared before Kat and communicated her via astral projection.

Retrieved from "https://vsbattles.fandom.com/wiki/Elektricitie?oldid=5071736"
Community content is available under CC-BY-SA unless otherwise noted.