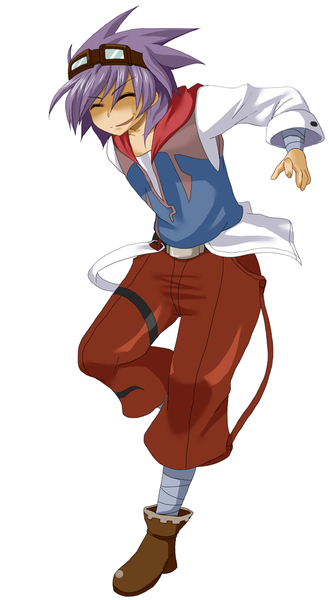 Eldio is a playable character in Wonderful World. An assassin who belongs to a certain Laboratory. Crazy brutality, he feels supreme pleasure in hurting people. Always smiling while killing the target while hurting the target. As a child, he was abused by his parents; when he snapped, he killed them without a 2nd thought, & woke up to the pleasure of murder as a result.

Powers and Abilities: Superhuman Physical Characteristics, Can sense ones Spirit Metaphysically with Psycho Edge, Can make illusions of himself, Adept with a Dagger, The ability to detect one's consciousness & personality with Psycho Edge, Explosions as a result of illusions, a Raging Demon esque move filled with slashes, can use Psycho Edge in & out of his hand.

Standard Equipment: Psycho Edge Eldio's Dagger, A spirit sensitive weapon that allows him to put a blade in and out with his intention.

Intelligence: High (Is a powerful enough Assassin to handle the best, at least.)

Weaknesses: Cocky, Arrogant, Sick in the head, appears to be liking the pain like a masochist when on the verge of death.

Feats: According to The World of Darkness, despite it being Non-Canon (The World of Darkness is a parralel storyline.), Eldio is actually a very powerful Assassin, can create explosions out of mere illusions, and can detect one's fears & weaknesses with Psycho Edge.

Note: Not to be confused with the JoJo's BIZARRE ADVENTURE character of a similar name.