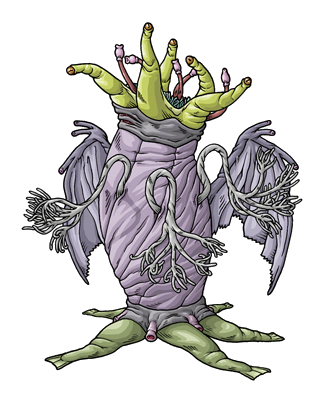 The Elder Things were the first alien species to come to the Earth, colonizing the planet about one billion years ago.

They are known to have warred against the Cthulhi, the Great Race of Yith and the Mi-go. Despite these conflicts, it was the gradual cooling of the planet during the last ice age that spelled their doom. Retreating to their undersea cities deep in the ocean, they would thereafter have no further dealings with the outer world. Their last surface city, located on a high plateau in the Antarctic, remains frozen in ice. The ruins of this city were discovered in 1931 by two members of an Antarctic expedition from Miskatonic University.

Attack Potency: At least Building level to Multi-City Block level (Comparable to the Shoggoths and other races they have fought against) | Unknown (Completely repelled a Shoggoth rebellion, Were perfectly capable of warring against Cthulhu and his Star-spawn for numerous years). Can likely ignore conventional durability via "Atomic Disturbances" weapons

Intelligence: Varies (Mostly high, due to their advanced technology)

Weaknesses: They have lost quite some of their knowledge over the years

Key: Base | With tech