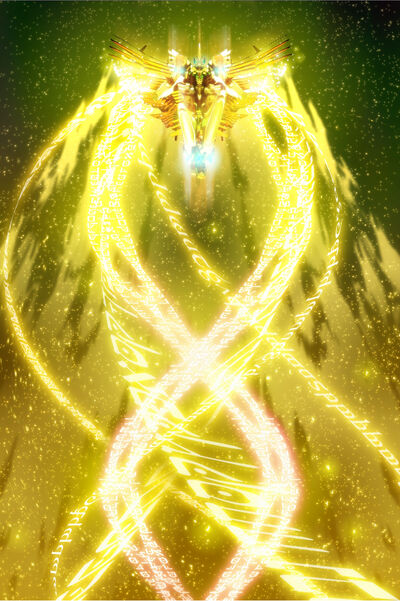 Tier: At least 3-A, 2-A with Shining Trapezohedron

Powers and Abilities Superhuman Physical Characteristics, Immortality (Type 3), Reality Manipulation, True Flight, Space-Time Manipulation (Can warp the entire space-time continuum to summon the Shining Trapezohedron), Non-Corporeal, Teleportation, Summoning (Can summon infinite possibilities and variations of itself across all of existence, and even non-existent ones), all the powers of Demonbane

Attack Potency: At least Universe level (Immensely superior to its normal counterpart, who easily destroyed a universe), Multiverse level+ with Shining Trapezohedron (Can turn infinite parallel universes into a barrier to seal the opponent, and can also be used to create and destroy new ones)

Speed: At least FTL (Should be faster than his normal counterpart)

Standard Equipment: All the weapons of Demonbane, the Shining Trapezohedron and Lemuria Impact Ain Soph Aur

Intelligence: Unknown, possesses at least basic sentience, allowing it to fight even if Kurou Daijuuji and Al Azif cannot pilot it

Athleta Aeternum: Elder God Demonbane can summon an infinite number of  Demonbanes from any timeline and even ones that don't even exist. Used this to defeat Clockwork Phantom (Final Lot) by using all of the infinite Demonbanes' power to create a more powerful form of Lemuria Impact called "Lemuria Impact Ain Soph Aur".