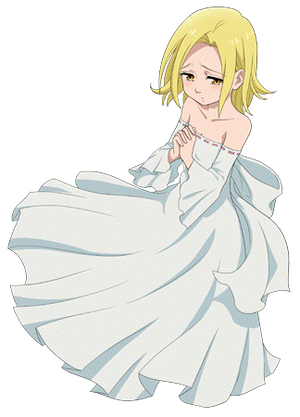 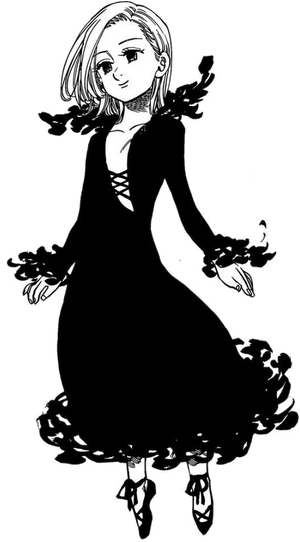 Elaine is King's sister and the guardian of the Fairy King's Forest in his absence. She guarded the Fountain of Youth for centuries, becoming lonely and isolated until she met Ban and fell in love with him. She was killed by a Red Demon and ensured Ban's survival by feeding him the Fountain of Youth as she died. She was later resurrected in an empowered state by Melascula's magic, and after she overcame the rage-inducing part of that magic she began travelling with Ban and the Seven Deadly Sins as their ally.

Classification: Fairy, Holy Maiden, Protector of the Fountain of Youth and the Fairy King's Forest

Attack Potency: At least City level (Stronger than Vivian. Injured Ban and overwhelmed Gerharde) | At least Island level (Significantly more powerful than Hunter Fest Ban after he stole half of Galand's strength. Her tornadoes were powerful enough to prevent Melascula from escaping through them in her Snake Form)

Durability: At least City level (Should not be weaker than her own attacks. Even weaker Fairies survived hits from an Albion with heavy injuries. Note that her resurrection at Melascula's hands also empowered her compared to when she was originally killed) | Likely Island level (Should be comparable to her own power)

Range: Standard melee range, several kilometers with her magic (Holds dominion over the Fairy King's Forest and can detect and attack others through it)

Weaknesses: Elaine is sheltered and has little knowledge of the world outside of the Fairy King's Forest other than what Ban has shown her.

Plant Manipulation: Elaine can manipulate the plants around her to restrain and crush her targets. Note that she has only demonstrated this ability within the Fairy King's Forest.

Miracle Wind: Elaine's magic power gives her the ability to generate and control wind. Many of her standard attacks involve shredding winds that deal deep cuts on their victim.

Key: Base (After Resurrection) | Wings

Retrieved from "https://vsbattles.fandom.com/wiki/Elaine_(Nanatsu_no_Taizai)?oldid=4552718"
Community content is available under CC-BY-SA unless otherwise noted.