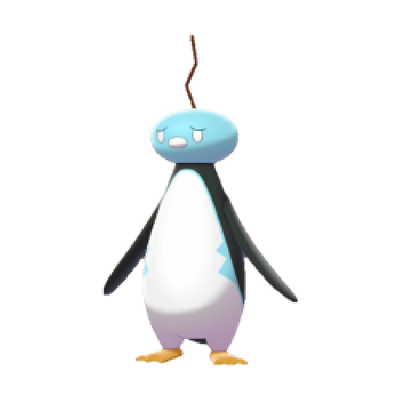 Eiscue is a penguin Pokémon that was released in Generation 8. It appears exclusively on Route 10 in Pokémon Shield, where it has a 2% chance of being encountered. Its most notable trait is the large ice cube covering its face, which it uses to cool its heat-sensitive head. Its signature ability, Ice Face, utilizes this ice cube to completely absorb and nullify the first physical attack it receives, shattering it and giving it a huge boost in speed at the cost of defense. This ice cube will grow back if it hails.

Attack Potency: Large Town level (via scaling to Dawn's Piplup, who is comparable to second-stage Pokémon)

Speed: Massively Hypersonic+ (Can keep up with 2nd stage Pokemon)

Durability: Large Town level, likely far higher via Ice Face (The ice cube, while it breaks upon contact, still completely blocks off a single physical attack, even if said attack would have otherwise oneshot Eiscue)

Stamina: Likely very high, lives a large amount of time with the ice block covering its head and is able to walk around carrying it without getting worn out too easily