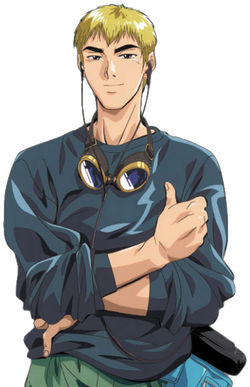 Eikichi Onizuka is the main protagonist of the Great Teacher Onizuka (GTO) series. He is a former gang leader who later becomes a teacher at a private middle school, Holy Forest Academy, in Tokyo.

Lifting Strength: Class 5 (Sent a log flying with a kick)

Durability: Wall level (Surviver a fall from a rooftop destroying a car)

Stamina: Extremely high (Took an exam bleeding with 3 bullet wounds without showing any sign of injury)

Intelligence: Above average (Despite being goofy, he has shown to be quite resourceful. On top of that he learned 8 years in one week and got a perfect score on the exams)

Weaknesses: He is very goofy, inattentive and can easily be tricked.