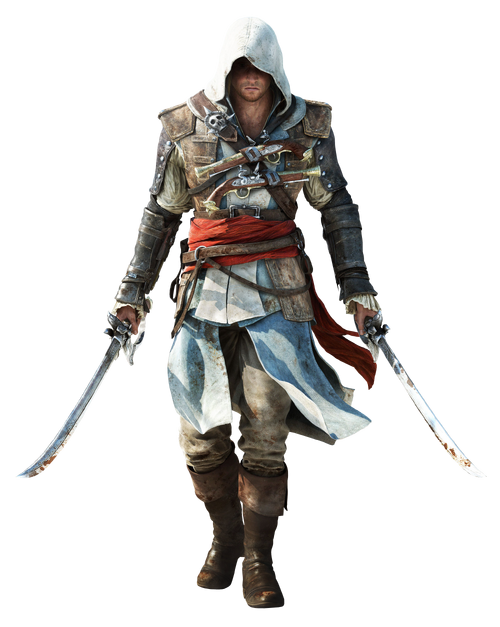 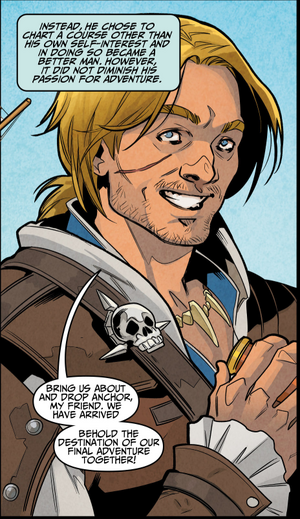 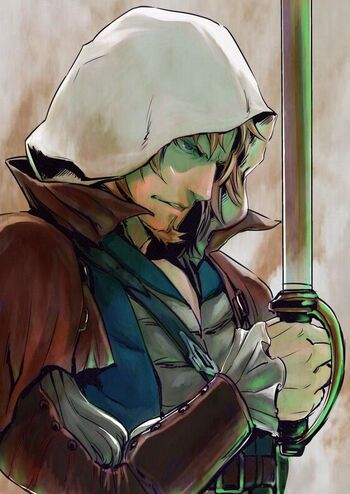 Edward James Kenway (1693 – 1735) was a Welsh-born British privateer-turned-pirate and a member of the West Indies and British Brotherhood of Assassins.

Born to humble farmers, Edward sought to acquire riches and fame. He became a privateer for the Royal Navy early in his life and, once accepted, found himself stationed in the West Indies. However, a quick end to the War of the Spanish Succession and the promise of gold, glory, and fame eventually seduced him into a life of piracy. It was during this quest that Edward first encountered the Assassin and Templar orders, and became embroiled in their struggle.

Over the next few years, Edward struggled with the internal conflict that arose from his desire for fame and riches—through finding the Observatory—and his duty to his friends. After losing nearly all of his closest friends, including his wife to smallpox, he realized the folly of his quest for glory. He then joined the Assassin Order, hunted down the Templars in the region and entrusted the Observatory to the Assassins.

After a decade in the West Indies, Edward returned to Britain and received a pardon from Robert Walpole, shortly after killing the Templars responsible for burning down his family farm and refusing treatment to his wife. He soon acquired an estate in London and married Tessa Stephenson-Oakley, with whom he fathered a son named Haytham. He quickly joined the British Brotherhood of Assassins, rising up to the rank of Master Assassin, and eventually, leader. Continuing his work as an Assassin, Edward researched the First Civilization and kept the research in a journal, and later came into contact with a Shroud of Eden, hiding it at the Tower of London so that none would misuse its powers. In 1735, he was killed by mercenaries in the employ of Templar Grand Master Reginald Birch, in order to acquire the journal. Haytham would later father Ratonhnhaké:ton; through this line, Edward is an ancestor of William Miles, and his son, Desmond.

In 2013, an Abstergo Entertainment research analyst was tasked with exploring Edward's genetic memories in order to gather footage for a planned video game, Pirates of Nightmares.

Tier: At least 9-A, higher with most melee weapons, his personal swords, Hidden Blades and firearms, and even higher with the Shroud of Eden

Classification: Human-Isu Hybrid, Captain of the Jackdaw, Formerly a privateer, then a Pirate, unwittingly a Templar (Until he gets caught by El Tiburón), later a Master Assassin and eventually Leader of the British Brotherhood

Superhuman Physical Characteristics, Peak Human Conditioning (Can hold his breath underwater far longer than most peak-bodied people), Enhanced Senses, Extrasensory Perception, Clairvoyance, Information Analysis, Retrocognition and Analytical Prediction (Via Eagle Vision. Edward stated that he was able to use Eagle Vision as a child and as a result also managed to enhance his other senses to detect sounds, dangers and the like. Could also see through walls and could see symbols no other normal humans could, and can even tag multiple targets at any time to keep track of them even when they are behind a medium like walls), Extremely talented ship captain, Technology Manipulation (As an Isu-Hybrid, Edward is capable of interacting with and using First Civilization technology without suffering from any detrimental effects), Regeneration (Mid-Low, can heal from gunshot wounds and being stabbed rather quickly. Healed from a shot to the stomach by Duncan Walpole), Master Fighter, Pressure Point Strikes (Capable of knocking out enemies by striking their pressure points and can induce immense pain this way), Weapon Mastery (Sword, Blowpipe, Rope Dart, Guns, Throwing Knives, Dual Hidden Blades, Spears, Bow and Arrow, Smoke Bombs, ship weaponry, etc.), Highly skilled acrobat, skilled tactician, Stealth Mastery, Extreme Pain Tolerance, Indomitable Will

Resistance to Illusion Creation, Perception Manipulation, Sense Manipulation, Mind Control, Mind Manipulation, Madness Manipulation (Types 1, 2 and 3), Willpower Manipulation, Empathic Manipulation, Fear Manipulation, Sleep Manipulation, Death Manipulation, Pain Manipulation, Status Effect Inducement, Paralysis Inducement, Telekinesis, Transmutation, Life Absorption (Should naturally possess these resistances against all the Pieces of Eden due to being an Isu-Hybrid, who lack the neurotransmitters required for the Pieces of Eden to work against them), Diseases (Had frequent encounters with diseases like tuberculosis and chicken-pox, diseases which claimed the lives of his father and first wife Caroline respectively), Poison Manipulation (Has resisted the effects of sleep darts, poison darts and beserk darts several times, first in his mission to guard the Sage's convoy early in the game, and then secondly when he entered Long Island in Jamaica and fought against its tribe. Has also repeatedly resisted being stung by highly-toxic jellyfish for extended periods of time while underwater) and Extreme Heat (Being burned for extended periods of time does nothing to him)

All abilities of his base self at higher levels, Immortality (Types 1 and 3)

Attack Potency: At least Small Building level+ (As a fully-fledged Isu-Hybrid, he should be comparable in strength to the rest of the protagonists in the series. Fought off and killed Duncan Walpole, a former Master Assassin-turned-Templar, all while heavily injured from a blast that destroyed his previous ship, with Master Assassins being at the very least comparable to Altaïr and Ezio in strength. He can fight against and easily defeat those who can harm him and have comparable durability, and can also harm himself. Can tear apart metal padlocks with a single punch or kick, break furniture in half, and can force open locked chests with just a single kick. Can casually shove his pistols into skulls. Equal to his quartermaster and best friend Adéwalé, who fought against Shay Cormac. Can hold his own against bull sharks, overpower crocodiles and easily fodderize jaguars. Overpowered and killed Bartholomew Roberts, a Sage, with ridiculous ease), higher with most melee weapons, his personal swords, Hidden Blades and firearms (Killed El Tiburón by repeatedly shooting him. His guns are capable of easily penetrating multiple skulls in a single shot. His swords can easily break open metal locks and cut through metal), and even higher with the Shroud of Eden (The Shroud of Eden significantly enhances the user's base abilities to significantly higher levels)

Speed: At least Supersonic+ (Shouldn't be much slower compared to most other Isu-Hybrids like Ezio, Altaïr, Adéwalé, his son Haytham or his grandson Connor. Capable of easily dodging gunshots from flintlocks and muskets at point-blank range in a similar fashion to Connor. Outran the mortar fire that shelled Ocracoke in 1718. Dodged shots from Charles Vane's pistols. Equal to and fought on par with Bartholomew Roberts, who would be equals to another fellow sage, François-Thomas Germain, and wouldn't be much slower than the Isu), higher with the Shroud of Eden

Lifting Strength: At least Class 5 (Can easily overpower fully-mature American crocodiles, which weigh in at an average of 450-500 kg, in a wrestling match, and crocodiles have lifting strength several times greater than their body weight. Also equal in strength to Adéwalé. Can hold back bull sharks for a while and easily fodderize jaguars in a wrestling match. Effortlessly moved a large beam stuck into place by himself underwater. Easily wrestled with Roberts several times during their confrontations and always overpowered him. Can swing around massive battle-axes with ease and elegance. Capable of tearing apart chains, metal locks and bilboes all by himself with his bare hands alone, which would require this much force at the very minimum for normal iron chains alone. Is unaffected by hurricane-force winds and can easily maintain near-perfect control of his ships while inside violent storms. His fight with Duncan Walpole resulted in the latter's Hidden Blades being completely bent out of shape), higher with the Shroud of Eden

Striking Strength: At least Small Building Class+, higher with the Shroud of Eden

Durability: At least Small Building level+ (Brushed off being shot multiple times at point-blank range right in his vital points, has easily survived extremely high falls without fracturing his bones and has tanked massive explosions from cannonballs, exploding gunpowder barrels and grenades that easily destroyed massive stone beams, scaffoldings and huge portions of massive warships at the same time without any armor multiple times in a row, easily making him this durable at the very minimum, with the exact same barrels being used throughout the Kenway Saga. Is equals with Adéwalé. Should be on par with other Isu-Hybrids, who can hold their own against Olympos Projects, withstand bombs this powerful and tank cannonballs of these levels. Easily no-selled the defensive energy beams of the Observatory that can simultaneously vaporize upto three human beings at the slightest touch and reduce them to a bloody mist. Can withstand swivel gun shots, which can punch through the Mayan Armor's defenses), higher with armor sets and the Mayan Armor (The Mayan Armor is essentially immune to any small projectiles that hit him and is bulletproof. As it is made of the same materials as the rest of the Pieces of Eden, it should also be comparable to them in terms of durability, with Pieces of Eden being able to damage the likes of the Minotaur), and even higher with the Shroud of Eden

Stamina: Incredibly high (Capable of single-handedly clearing a Spanish galleon and blitzing everyone on board. Defeated Charles Vane and captured a fishing schooner on his own after being stranded on a deserted island for four months. Can also continue fighting even when tortured to the point of starvation). Infinite with the Shroud of Eden

Intelligence: Gifted. According to Blackbeard he ranks amongst the most clever of all the pirates of the West Indies. An extremely talented sailor by his own merit, was also recognized as one of the greatest Assassin leaders the British Brotherhood had ever seen or known. Even when he had just started his career his athletic and combat prowess were more than enough to easily kill the likes of a highly-trained Master Assassin like Duncan Walpole and even rival the Brotherhood's prowess in stealth, something which increased even more after he officially joined the Brotherhood back in England.

Weaknesses: Standard human weaknesses, but has survived situations that would kill peak-level humans. Was initially only motivated by greed for money, forgetting completely about his family, until he witnessed the death of his loved ones. Unable to run while using Eagle Vision to search for targets. The Mayan Armor can't repel larger projectiles from the likes of swivel guns and cannons.