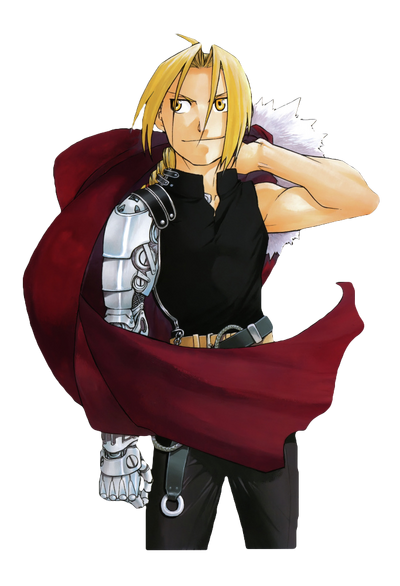 Edward Elric (エドワード・エルリック, Edowādo Erurikku), the Fullmetal Alchemist (鋼の錬金術師, Hagane no Renkinjutsushi), is the titular protagonist of the Fullmetal Alchemist series. After losing his right arm and left leg due to a failed Human Transmutation attempt, Ed became the youngest State Alchemist in history by achieving his certification at age twelve. Three years later, Ed has become fully engrossed in his search for the legendary Philosopher's Stone, an item with which he hopes to restore his younger brother Alphonse - whose whole body had been lost in the aftermath of the human transmutation.

Attack Potency: Building level physically (Is capable of injuring people who can hurt him). Large Building level with alchemy (Erected a statue and can morph multiple buildings at once), can negate durability to some extent

Speed: Supersonic+ (Can dodge a bullet at point blank range), Hypersonic with a lighter automail (Solf J. Kimblee realized that he is too fast, likely able to keep up with Greedling, who can keep up with Wrath)

Durability: Building level (Survived an explosion from Kimblee at close range, though he was badly injured)

Standard Equipment: Upscale car armoring (Dentures) of the left leg and right arm, which can be converted into a weapon with alchemy

Intelligence: Edward is an alchemical prodigy. He is a genius in alchemy, quickly and accurately analyzes the ability of the enemy and how to counter, use tricks and traps, able to withstand a group of armed opponents of firearms

Weaknesses: Human weaknesses, short-tempered; He is rendered useless if his auto-mail arm is destroyed

Edward, in spite of the low growth and thin build, is an extremely clever and skillful fighter, effectively using his agility and martial arts. And because of its impact attach heavy metal prosthetic arms and legs, so that only one blow, Edward can cut down a large adult male. Knows how to make grips, for example, from handstands can capture the enemy's neck and feet to beat his head against the floor or intercept an armed hand and lay on the ground painful grip. He also skillfully in using his upscale car armoring - metal prostheses directly connected to his nerves, which he ran no worse than his arm and leg. A particular strength of the metal alloy prosthesis allows you to block attacks that can cut or break the usual steel. For example, shots or blows with swords (which just about dentures break).

Edward has an extremely high strength of will and resistance to injuries and pain. When he suffered from his lost limbs, he did not hesitate and put his hand to save his brother. Further, the life of his only tempered, Edward became even more convinced and inflexible.

Just Edward is a very skillful and strong alchemist.

Alchemy: The science of the transformation of matter from one form to another. Its main rule is that you can get anything, just giving something in return equivalent. Used in many areas of life, alchemy in FMA involves a three-step process. The first step - recognition of the structure of matter, the second - its decomposition into components, and the third - the synthesis of the components of the desired substance and giving it the desired shape. To carry out the transformation required to draw an alchemical circle that defines the essence of transmutation, and then the alchemist must activate it. Circles can be drawn, lined or cut on purpose conversion beside her, on clothing alchemist or even tattooed on his skin. This limits the range of usable transmutation, but the possible use instantly at any time. However, after the Edward human transmutation, he passed through the Gate of Truth and had the opportunity to use any kind of alchemy without using alchemical terms, just slamming into palm.