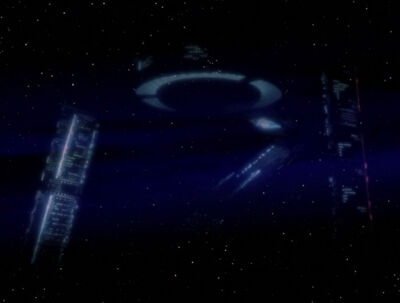 An entity referred to as "God," by the civilizations of the planets Rubicun III and Strnad, the Edo God was the protector and "father" of the humanoid peoples of that planet, accepted their worship, and prevented them from being influenced by outside forces or threatened.

According to Lt. Cmdr Data, the native Android of the U.S.S. Enterprise NCC-1701-D, the Edo God was once a group of beings that had once belonged to the third dimension, but had since ascended past it into a new level of existence, possibly becoming multi-dimensional in the process and existing in multiple places at once.

When Jean-Luc Picard, captain of the Enterprise, has to deal with Wesley Crusher being sentenced to death by the natives of Rubicun III due to breaking one of the Edo God's ancient treatises, he must parley with the entity in order to negotiate Wesley's release, which he eventually does, leaving the Edo people to their way of life peacefully.

Attack Potency: At least Universe level+, possibly up to Complex Multiverse level (The Edo God was defined as a higher-dimensional being/s that existed above our world and while not transcending the space-time continuum (multiverse), they existed in multiple places in it at once. While there is a strong implication that their multi-dimensionality exactly refers to multiple higher dimensions, it is unknown if this statement refers to them existing in multiple universes or higher dimensions, or perhaps both, as is likely. However, the beings were partially unable to be detected by the sensors of a 24th century starship, which was capable of detecting energy lifeforms as well as the non-corporeal, and up to 5-dimensional beings natively, further implying their higher dimensionality)

Speed: Unknown, likely Immeasurable (Existed in multiple places at once)

Intelligence: Vast, as they were essentially hyper-evolved humanoids who existed in "multiple dimensions," though it is unknown if the dimensions referred to are that of a higher nature (though it is strongly implied) or of a multi-universal nature (which is also implied)

Weaknesses: Rigid, possibly detrimental deference to old rules and tradition, though it can be convinced to set aside these aspersions. If the Edo are harmed, it/they can be enraged very quickly. 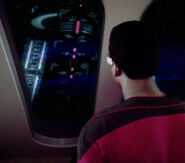 Lt. Geordi LaForge inspects the Edo God from the Enterprise
Add a photo to this gallery

Retrieved from "https://vsbattles.fandom.com/wiki/Edo_God?oldid=4609560"
Community content is available under CC-BY-SA unless otherwise noted.