Edge Master has a mysterious past; he is renowned for his skill with various weapons, and his past and real name are known only to himself. He served as adviser and teacher of Ling-Sheng Su martial arts at Ling-Sheng Su Temple, who would descend from the mountain only to participate in the temple's holy artefacts succession ceremony and train their inheritors-- before he burned it down following the fateful night of the Evil Seed. Edge Master found Kilik, the cursed successor of the Kali-Yuga, in the temple and taught him to suppress the evil within himself over a three-year training session. Once Kilik had completed the training, Edge Master gave him the final test of destroying Soul Edge; but after Kilik left on his journey to purify himself and the Kali-Yuga, Edge Master began to feel uneasy. Although his motives are unknown, he broke his silence and departed on a quest of his own.

Age: Unknown, hails from "an age found only in myth", and predates recorded history

Attack Potency: Possibly Planet level (Stated that he'd be willing to fight Algol in Astral Chaos. However, he wasn't sure if he'd be able to win)

Speed: Superhuman with Supersonic+ reactions and combat speed via scaling

Lifting Strength: Class M (Should be vastly above regular humans due to his ability wield all of the weapons in the game)

Range: Extended melee range (Varies depending on the weapon he is wielding)

Intelligence: Gifted (Centuries of wisdom. The Edge Master has been described as the most skilled fighter in the series, rivaled only by Olcadan and eventually by his student Kilik. Over the course of his long life, Edge Master invented and/or learned every fighting style, martial art, and weapon in the Soul Calibur series, and mastered all of them to the point that he regularly defeats others using their own preexisting abilities, and additionally possesses enough knowledge of every character's fighting style to effectively train them to a similar level of perfect mastery. Back in the Time of Myths, he was the rival of Algol the Hero King, defeating him every time they fought, and had a completely flawless battle record marred only by a draw against Olcadan. Edge Master also possesses a seemingly eternal lifespan, and as such has been in countless battles) 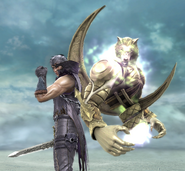 The Lupan Edge Master can summon.
Add a photo to this gallery