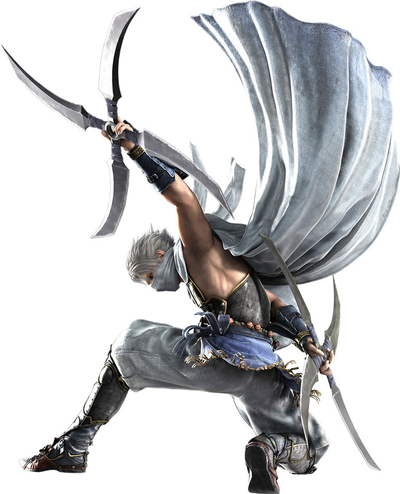 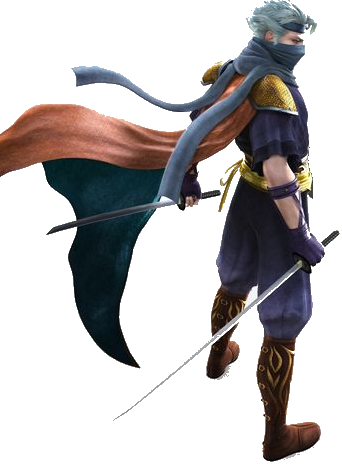 Edge Geraldine is the prince, and later king, of Eblan. Despite his prowess in his homeland's style of combat, Edge is brash, outspoken, arrogant, and a shameless flirt. However, everything changed when his parents were kidnapped by the Archfiend Rubicante, causing Edge to join the heroes on a quest for revenge.

Powers and Abilities: Superhuman Physical Characteristics, Ninjutsu, Elemental Manipulation, Healing, Weapon Mastery, Duplication, Skilled Hand-to-Hand Combatant, Can bind targets to restrain their movements, Can nullify almost any form of elemental magic with his Cloak of Flame, Can throw virtually anything remotely classified as a bladed weapon as a lethal projectile

Attack Potency: At least Multi-Continent level (Superior to the Giant of Babil), likely Small Planet level (Fought and defeated Zeromus, who is superior to the Lunarians who moved the Red Moon out of orbit) | Large Planet level (Defeated The Creator, who could move the True Moon thousands of kilometers in seconds, defeated base Gilgamesh in the Depths of the True Moon)

Speed: At least Massively Hypersonic (Faster than Cecil, who reacted to the shockwaves caused by the Giant of Babil swings) | Sub-Relativistic (Fought Gilgamesh)

Stamina: Very high. He can fight through entire gauntlets of monsters without tiring and regularly takes hits for his allies, even against the likes of powerful beings like Zeromus. He has also faced the God of Eidolons, Bahamut, as well as an even more powerful version of Zeromus named Zeromus EG.

Range: Extended Melee Range with his sword, At least several meters with projectiles and ninjutsu

Intelligence: Edge is initially brash and arrogant with utter and complete confidence in his abilities. While his claims aren't entirely unfounded, being a prodigy in Eblan's ninja arts, he becomes more serious after learning and avenging his parents' fate. He becomes far more mature by the time of the After Years, reigning as the beloved King of Eblan and commanding his own personal squadron of elite ninja known as the Eblan Four. In combat he specializes in high-speed hit and run attacks, brutally striking an opponent before darting into the shadows and exploiting every weakness he can, killing opponents while they're left helpless by his Shadowbind technique and using his myriad of techniques to use the elements against them.