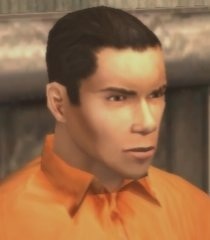 Edgar Munsen is a main character in Bully, and the leader of the Townies Clique. He first served as a major antagonist in Chapter 5, but after being defeated by Jimmy, he is now a supporting character.

Attack Potency: Wall level (Can rip off lead pipes from walls. Was able to overpower Jimmy Hopkins by using the lead pipe, though he ultimately lost)

Lifting Strength: Peak Human (Effortlessly ripped off lead pipes from walls. Should be comparable to Norton, who easily swung a large sledgehammer)

Stamina: High (Still kept on going even after being hit in the face by Jimmy's lead pipe numerous times)

Intelligence: Average (He is the leader of his own gang, as well as a skilled fighter)

Busting In, Part II Showdown at the Plant - Mission 64 - Bully Scholarship Edition
Add a photo to this gallery

Retrieved from "https://vsbattles.fandom.com/wiki/Edgar_Munsen?oldid=4694495"
Community content is available under CC-BY-SA unless otherwise noted.