VS Battles Wiki
Register
Don't have an account?
Sign In
Advertisement
in: Tier 9, Tier 9-B, Characters,
and 12 more 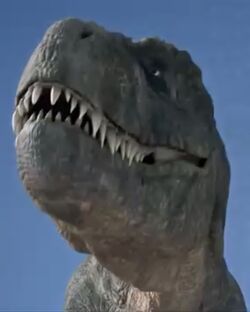 Ed the Badass is a Tarbosaurus from the dinosaur battle series DINO FIGHT, produced by EARTH PLANET. His only appearance is in the short "TARBOSAURUS VS ANKYLOSAURUS", in which he fights an ankylosaurus named Fat Whipper. Though injured, he wins his fight against the heavily armored opponent. Ed is one of the three Tarbosaurus to appear in the series, the only other one that is named is Rambo.

Attack Potency: Wall level (Can fight Fat Whipper, who should be at least as strong as a normal Ankylosaurus. Ed's size and weight warrant this rating)

Stamina: Superhuman (Comparable to other dinosaurs)

Intelligence: Animalistic (Knew where to attack Fat Whipper, so that the herbivore couldn't retaliate)