VS Battles Wiki
Register
Don't have an account?
Sign In
Advertisement
in: Characters, Cartoon Characters, Ed, Edd and Eddy,
and 23 more 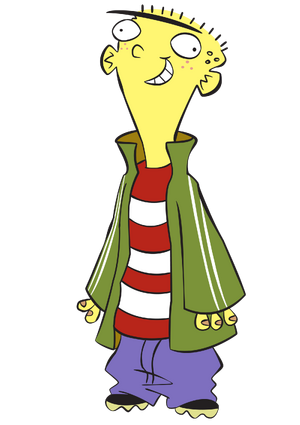 Ed is one of the three protagonists in Ed, Edd n Eddy. He is the strongest and the least intelligent member of the Eds.

Name: Ed Horace (his last name is not known)

Powers and Abilities: Superhuman Physical Characteristics, Toon Force, Regeneration (Low-High. Instantly reformed after being shattered like glass in Ed... Pass It On...), Berserk Mode (Shown many different times, most notably when he had a pebble stuck in his shoe in Little Ed Blue and after he watched too many horror movies in Ed, Edd n Eddy's Boo Haw Haw), Rage Power, Time Travel (Seen here), Self-Sustenance (Type 1, can survive on the moon and in the atmosphere), Superhuman Digestion (Swallowed Jimmy and ate all the food in the cul-de-sac in one night), Enhanced Senses (Smell. Can track down people from faraway distances just by sniffing the air), Strong jaws/bite force (Can easily chomp through metal), Summoning (Can summon his imaginary friend Jib, who appears as invisible and is strong enough to beat up Eddy), Can break the 4th wall, Flight (Can repeatedly flap his arms and fly in the air, and can use his lips as a rotor. Can also fly with the Jet Pack), Surface Scaling, Can survive horrible smells, Can stretch his body in inhuman ways, Duplication (Can make clones of himself), Sound Manipulation via screaming (His screams are strong enough to tear off Eddy's shirt, make Double D faint, push back Sarah, create cracks in the ground and send a small cardboard house flying), Invisibility (Turned invisible to hide within the school's locker room), Mind Manipulation (With the Hypnotizing Wheel, he can control people and make them act like an animal), Stealth Mastery (When he thought he was a monster, he used stealth to pick off the other kids), Body Control (Put his head into his body to dodge a cluster of grapes that were thrown at him)

Attack Potency: Varies from Small Building level to Building level+ (He destroyed buildings by accident, can lift and destroy trees with even his teeth and harm those comparable to him)

Speed: Superhuman (Can casually outrun Kevin's bike, which is very similar to a motorcycle. Outran a swarm of bees in Pop Goes the Ed. Can keep up with Double D, who can run up walls)

Lifting Strength: Class K (Can effortlessly lift houses, even as a little kid. Easily lifted up the Kankers' trailer house. With just one hand, he picked up his entire driveway with ease. Spun an entire Ferris wheel with his legs alone)

Standard Tactics: Ed will usually uproot parts of the environment such as stop signs, tree trunks, or even entire houses and use them as weapons. He will also use his natural strength and toon force to simply overpower the foe. If he thinks he's a monster, he will instead rely on stealth to pick them off, though he still uses his strength

Intelligence: Very low usually. Gets straight Fs on his report card, somewhat lacks common sense and sometimes seems unaware of the situation, gullible, once thought he had actually become a monster after he was dressed up as one. When told his feet smelled, he wondered how that was possible when they didn't have noses. However, he is skilled in some areas, such as playing the flute. He also gave a detailed summary of Robot Rebel Ranch, a movie he had never seen before. Actually gave another detailed statement about how "it's difficult to deal with girls", and was able to make exact replicas of notes from Double D's parents. In less than a day, he singlehandedly built an elevator that reached the Moon. His report card shows that he has an A in History.

Weaknesses: He is a moron and is sometimes a coward. Scared of broccoli, soap, deodorant, and spiders. Is allergic to rabbits, eels, dandelions, and butterscotch pudding.

Peter Griffin (Family Guy) Peter's profile (Both were 9-A, speed was equalized and battle took place on Spooner Street)