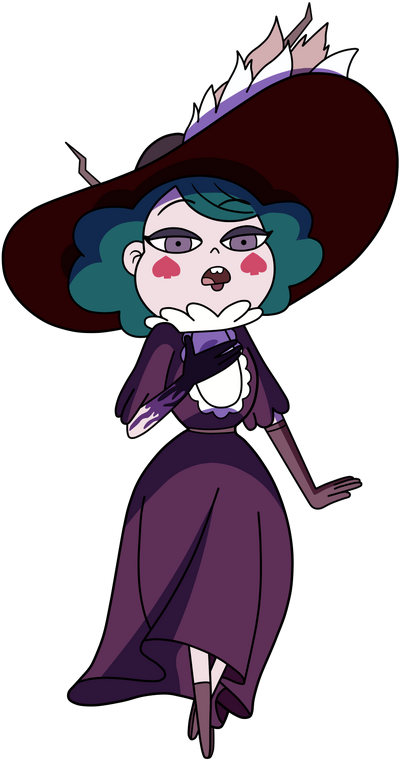 Queen Eclipsa Butterfly was the Queen of Mewni, the supposed ninth great grandmother to Star Butterfly and a former wielder of the Royal Magic Wand. Trapped in a loveless marriage to the Mewman King Shastican, she became known as the Queen of Darkness for her forays into dark, forbidden magic and for eloping with Globgor, an enormous monster. She would then have a daughter with Globgor, Meteora Butterfly, the rightful heir to the throne of Mewni.

But Shastican and the Magic High Commission refused to grant a monster any sort of position of power, much less the ability to use magic, crystallizing Eclipsa and striking Meteora from the Royal Archives before replacing her with a peasant girl named Festivia. Kept in stasis for 300 years, Eclipsa was briefly reawakened to forge a contract with the new queen of Mewni, Moon Butterfly, teaching the girl the spell she needed to destroy Toffee. After Toffee's ultimate defeat at the hands of Moon's daughter, Star, Eclipsa was freed and determined to find the whereabouts of her daughter.

Attack Potency: Building level to City Block level physically (Should be comparable to River Butterfly), At least Universe level+ with magic (Said to have the greatest magical potential of all of the Queens of Mewni with the exception of Star Butterfly. Eclipsa's powers intimidate the Magic High Commission, who are terrified of the prospect of her getting loose. The Magic High Commission includes Omnitraxus Prime, a living space-time continuum, as well as Moon Butterfly, who is more powerful than Omnitraxus. The Wand's basic spells can destroy universes. Easily defeated Meteora Butterfly, who had just defeated Star Butterfly with relative ease)

Speed: Unknown. At least Sub-Relativistic (Should be at least as fast as Moon Butterfly), Massively FTL+ Attack Speed (Skywene with the wand was capable of shooting a blast of energy that destroyed another universe.)

Durability: Building level to City Block level physically, At least Universe level+ with magic enhancement (Said to be be superior to Moon and Star)

Stamina: Unknown, should be high.

Intelligence: Very High. It's heavily implied that she's almost completely mastered the Wand and its spells. It's implied that she was one of the strongest wielders of the Wand. She has her own chapter in the Magic Instruction Book.

Weaknesses: Eclipsa never learned how to use magic without the Wand, rendering her powerless without it.