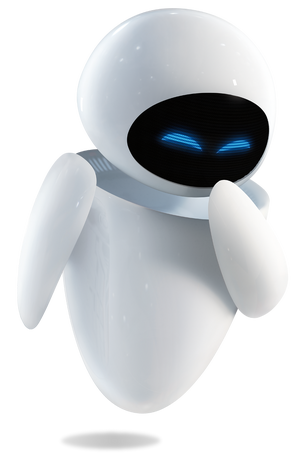 EVE is a drone robot of the Axiom, from the WALL-E movie. She first appears in the annual Earth search program in an attempt to find life.

Powers and Abilities: Superhuman Physical Characteristics, Inorganic Physiology (Type 2), Flight, Telekinesis, Body Control, Energy Projection/Plasma Manipulation (Via her arm cannon), Information Analysis (Via her scanner), Minor Electricity Manipulation (Can create at least a minor electrical current through her casing), Limited Resurrection (Will automatically reboot after a short time if she is forcefully shut down)

Lifting Strength: At least Superhuman (Held a tramcar back.)

Striking Strength: Building Class+ (Knocked WALL-E, who can tank being extremely close to her plasma shots, away from her hard enough to damage his eye)

Durability: Building level+ (Should be more durable than WALL-E)

Stamina: Virtually limitless as a robot.

Intelligence: Gifted (Knows a large range of languages, fixed WALL-E in a short timeframe, solved a Rubik's cube in seconds)