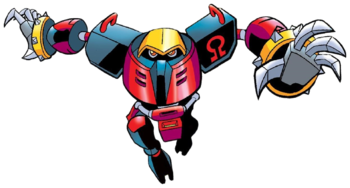 E-123 "Omega" is a character that appears in the Sonic the Hedgehog comic series and its spin-offs published by Archie Comics. He is a Badnik built by Dr. Eggman as part of his E-100 Series, who rebelled against the doctor and joined Team Dark to get revenge on his creator. He and his teammates- Shadow the Hedgehog and Rouge the Bat- work against his former creator in their efforts to protect his world as agents of the Guardian Units of the Nation.

Gender: Technically none, referred to as male

Attack Potency: Moon level (Stronger than Shadow the Hedgehog. Broke through Walter Naugus' Crystals when Knuckles could not. Somewhat held his own against Eclipse's Monster Form) | Moon level (The combined might of Shadow, Knuckles, Amy, and Rouge was required to subdue him)

Speed: FTL (Can keep up with Shadow) | FTL

Intelligence: Is a highly skilled combatant of caliber similar to Shadow and was capable of holding his own against Eclipse the Darkling. 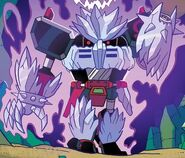 Crystal Omega
Add a photo to this gallery