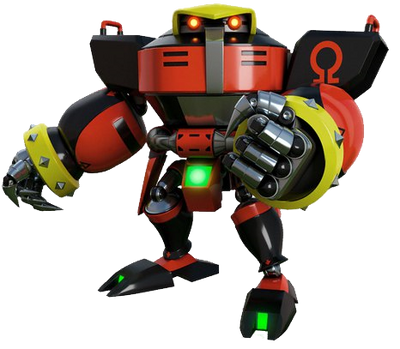 E-123 Omega is a robot created by Doctor Eggman as the last member of the E-100 series robots, originally created with the purpose of containing Shadow in stasis. He was imprisoned along with him after he failed to do so. This drove him to prove himself as the strongest of Eggman's robots. After battling Shadow he became a member of Team Dark along with him and Rouge, and continued towards his goal with his new team.

Origin: Sonic the Hedgehog (The Universe)

Gender: None, referred to as male.

Statistics Amplification (With Speed Shoes, Golden Gloves and Speed Bar), Healing (With Health Seeds, Health Roots, Health Leaves, and Antidotes), Elemental Manipulation (Of Water, Electricity, Ice, Wind, and Earth varieties via elemental Rings), Fear Inducement (With the Spooky Charm), Resurrection (With Angel Amulet and Ring of Life), Life-Force Absorption (With Nocturne Blade), Purification (Type 3 with Cure All Spray), Invulnerability (With the Invincibility Monitor), Resistance to Status Effect Inducement (With the Immunity Idol). With Chao: Statistics Amplification (With Cheezlet and Blayze, attacks do much more damage), Damage Reduction (With Velk and Gibber, damage from attacks are greatly reduced), Healing (With Stebsly and Joy, vitality is regenerated over the course of a fight), Resurrection (With Ovus, their partner is automatically brought back up to three times in one battle), Probability Manipulation (With Koolet, Belgog, Fimbley, and Stugs, enemy attacks have a greater chance of missing. Churdle and Oldarg give a higher chance of hitting the opponent. Keroyo increases the chance of an enemy fleeing. Spartoi grants a chance to instantly knock out the opponent with every attack done), Shield Creation (Can make passive shields of fire, water, wind, lightning, and earth that stay even after being hit), Elemental Manipulation (Can imbue his attacks with fire, water, wind, lightning, earth, and ice), and Damage Transferal (With Pooki, damage taken is split between teammates). With the Color Powers: Transformation, Fire Manipulation and Explosion Manipulation (With Red Burst and Black Bomb), Vibration Manipulation (With Blue Cube and Gray Quake), Energy Projection (With Cyan Laser and Crimson Eagle), Electricity Manipulation (With Ivory Lightning), Invisibility (With Jade Ghost), Transmutation, Pseudo- Black Hole Creation, Gravity Manipulation, Size Manipulation, and Absorption (With Indigo Asteroid, Violet Void, and Purple Frenzy), Intangibility (With Violet Void), Flight and Levitation (With Crimson Eagle, Green Hover, Indigo Asteroid, Magenta Rhythm, Orange Rocket, and Violet Void), Void Manipulation (With Violet Void)

Speed: At least FTL (Superior to Classic Sonic and is comparable to, but slower than, Shadow)

Weaknesses: Usually charges into battle without thinking, and his targeting system is horrendously inaccurate. 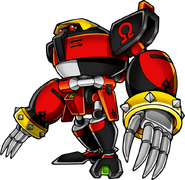 Generations Omega.
Add a photo to this gallery