E-105 Zeta is a member of the E-100 series of robotic units made by Dr. Eggman. When tasked with finding Froggy, Zeta was ousted by Eggman for capturing the wrong frog. Later on he is forced to undergo major reconstruction, becoming a stationary, tower like defense unit rather than his original humanoid design. The enormous machine is eventually defeated at the hands of one of his "brothers," E-102 Gamma during his infiltration of Eggman's ship.

Attack Potency: Planet level+ (Can temporarily keep E-102 Gamma at bay with his missiles. Is used to protect Eggman's ship from powerful threats)

Speed: Immobile with FTL reactions and attack speed (Able to react to Gamma and his missiles are capable of tagging him)

Durability: Planet level+ (Can withstand attacks from Gamma. His newer form was considered an upgrade, meaning his durability should likely be greater than his previous form, which was somewhat comparable to the other robots in the E-100 series)

Weaknesses: Is stationary and incapable of movement besides shooting rockets. 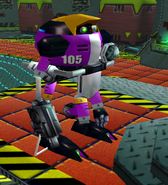 Retrieved from "https://vsbattles.fandom.com/wiki/E-105_Zeta?oldid=4998113"
Community content is available under CC-BY-SA unless otherwise noted.