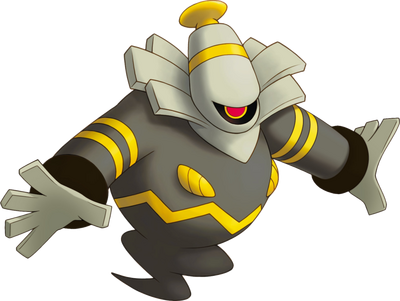 Attack Potency: At least Universe level+ (Fought and won against a weakened Primal Dialga alongside Grovyle and Celebi. Primal Dialga is weaker than normal Dialga and can only control one timeline, but still has the same mastery over said timeline like his normal self would have over all)

Stamina: Very high (Can continue to fight even after tanking his own Shadow Ball [which he is weak to], albeit after a brief period to rest)

Range: Standard melee range, tens of kilometers with most attacks, far higher with the Escape Orb

Standard Equipment: To see a list of Dusknoir's optional equipment, check out this blog here

Intelligence: Extremely high (Is a master of deception and manipulation, has studied all he could over many fields as he is shown to be knowledgeable in lore, navigation, combating types he is weak to, and more. He is an excellent actor as well, fooling the world into believing he is the hero, and Grovyle [who is cautious by all counts and up to that point was his veritable arch-enemy] into trusting him, nearly leading to his death. He's also an excellent fighter, being able to fight multiple opponents he would be weak to at once, albeit with help from Grovyle)