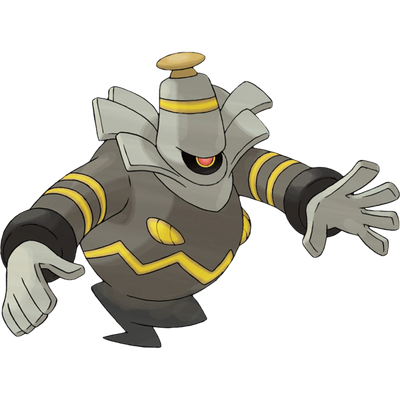 Dusknoir is a final form ghost-type Pokémon introduced in Gen IV. It evolves from Duskull into Dusclops, and from Dusclops into Dusknoir by holding a Reaper Cloth and being traded.

The antenna on Dusknoir's head allows it to receive transmissions from the spirit world, which tell it to bring people there. The band on its body can open, similar to a mouth. It uses this ability to take spirits into its body and carry them home or as it travels to unknown places.

Powers and Abilities: Superhuman Physical Characteristics, Superhuman Speed, Self-Sustenance (Types 1 and 2), Invisibility (Dusknoir's pre-evolution, Duskull, is able to make itself invisible), Intangibility and Non-Corporeal (Dusknoir is a Pokémon native from the Ghost World, another plane of existence where the spirits of deceased humans and pokémon reside, as well as other ghost-type pokémon. Dusknoir's body is intangible and completely hollow, and inside there is only a void and spectral flames. Dusknoir also should be comparable to Pokémon like Gengar), Levitation, Limited Accelerated Development (Via Exp. Elite), Elemental Manipulation (Of the Darkness, Hellfire, Fire, Ice, and Electricity variety), Air Manipulation (Via Ominous Wind), Ectoplasm Manipulation (Via Ghost-Type moves), Enhanced Senses (Via Stair Sensor. The antenna on its head captures radio waves from another worlds), Water Walking (Via All-Terrain Hiker), Stealth Mastery and Camouflage (Its pre-evolution, Duskull, can hide among the shadows and is an excellent tracker), Telekinesis (Via Psychic), Immortality (Type 1 and 7), Dimensional Travel, Teleportation and possible Portal Creation (Dusknoir can travel and teleport to other worlds and places, its PMD counterpart can create portals), Body Control, Mind Manipulation (Its pre-evolution, Dusclops, can hypnotizes its foe by waving its hands in a macabre manner and by bringing its single eye to bear. The hypnotized foe is made to do Dusclops's bidding), Absorption (Its pre-evolution, Dusclops, can absorb anything, however large the object may be), Soul Absorption (Dusknoir can absorb souls), Possession (Of an empty body), Limited Death Manipulation and Fate Manipulation (Via Destiny Bond), Limited Probability Manipulation (Via Type-Advantage Master and Sharpshooter), Fear Manipulation (A glare from the single scarlet eye of Duskull makes even burly grown-ups freeze in utter fear), Empathic Manipulation (Via Dark Pulse. Dusknoir can shoot orbs imbued with loathsome emotions), Aura (Explosive and Fear type; Via Dark Pulse), Sleep Manipulation (Via Sleep Charm), Void Manipulation (Inside Dusknoir's body there is a void, everything that absorbs this void will never come back), Dimensional/Spiritual BFR (Dusknoir can drag souls to other dimensions), Power Nullification (Via Disable, Mean Look and Imprison. Dusknoir can inflict the "Paused" status, which prevents the opponent from using moves temporarily), Curse Manipulation (Via Curse and Grudge), Smoke Manipulation and Negation (Via Haze), Berserk Mode, Danmaku, Homing Attack (Shadow Punch), Perception Manipulation (Via Night Shade), Illusion Creation (Its pre-evolution, Duskull, can create illusions to frighten or deceive its opponents), Light Manipulation (Via Confuse Ray), Precognition (Via Future Sight), Resistance Negation (Via TCG Shadow Punch), Limited Immunity Negation, Invisibility Negation and Illusion Negation (Via Foresight), Mind Reading (Via Foresight), Status Effect Inducement (Via Fire Punch, Ice Punch, Thunder Punch, Sleep Charm, Will O' Wisp and Confuse Ray), Statistics Reduction (Via Leer, Shadow Ball, Frighten and Memento), Statistics Amplification (Via Ominous Wind), Gravity Manipulation (Via Gravity), Soul Manipulation (The spectral ball of fire that Dusknoir generates inside its body steal the soul instantly from those who look at it. Dusknoir can tear the soul directly from its opponents and can harm ghosts and souls), Durability Negation (Via Curse, Pain Split and Soul Manipulation), Life Force Absorption (Via Pain Split), Damage Boost (Via Payback, Hex and Pursuit), Damage Transferal (Via Pain Split), Pseudo-Black Hole Creation, Can swap passive abilities via Skill Swap, Can do more damage when things are looking desperate, Takes down stamina twice as quick, Non-Physical Interaction (Can harm non-corporeal Pokemon), Dynamax, Resistance to Poison and Bug moves, Immunity to Normal and Fighting moves, Resistance to Gravity Manipulation, Future Sight bypasses Shields and Precognition.

Speed: Relativistic (Pokémon of this caliber are more than capable of reacting to Seismic Tosses from the likes of Pokémon who can throw at these speeds, like Machamp or Primeape. His PMD counterpart can do this)

Intelligence: Above average, but as a Pokémon, has naturally high battle capabilities

Weaknesses: Dark moves as well as other Ghost moves 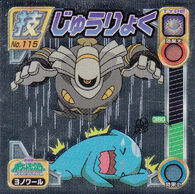 Duskull: "Making itself invisible, it silently sneaks up to prey. It has the ability to slip through thick walls."

Dusknoir: "It is said to take lost spirits into its pliant body and guide them home."
Add a photo to this gallery