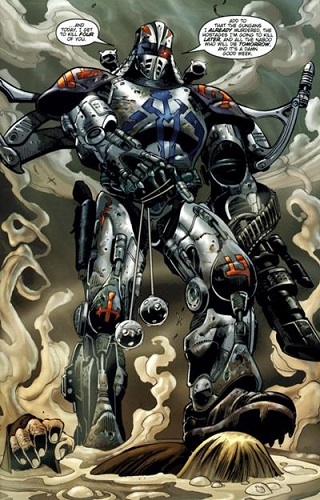 Durge is a Gen'dai bounty hunter and a formidable opponent of the Republic. Having traversed every kind of battlefield over the last 2,000 years, Durge is obsessed with killing Mandalorians due to his past experiences, performing numerous missions for Count Dooku solely for the chance to slaughter countless Clone Troopers en masse.

Powers and Abilities: Superhuman Physical Characteristics, Enhanced Senses, Weapon Mastery, Regeneration (High-Mid, Gen'dai can only be killed if their entire body is vaporized at once and reduced to the atomic level), Longevity (Gen'dai can live up to 4000 years, some have lived up to 7000 years), Body Control & Elasticity (Having parts of his body destroyed allow him to grow tentacles he can use to grab and attacks others), Energy Shields, Fire Manipulation via flamethrower

Speed: Relativistic with FTL combat speed and reactions (Can easily tag Obi-Wan and Anakin, mentions Obi-Wan moving in slow motion to him)

Stamina: Immense (Is unhindered by the loss of both hands and is undeterred by nine explosive charges detonating in his face at point blank range, completely lacks vital organs)

Intelligence: Has hunted and fought Jedi and Mandalorians. 2,000 years of combat experience.