Dungeon Hunter is a series of Medieval Action Role-playing, Hack and Slash games, which can be played on both Desktop and Mobile, with its first game being released in 2009, the Franchise, even to this day, still releases new games.

Despite lacking in AP, Striking Strength and Durability, it has a variety of abilities ranging from Soul Manipulation to even Probability Manipulation and a character who is flat out immune to all magical attacks and abilities within the verse. Even the regular human warriors in the verse, have Superhuman Physical Characteristics and amplified regeneration, with the top tiers going all the way up to Planet level. Some characters can even attack Non-Corporeal beings without any form of hax whatsoever, just with their casual blows. In terms of speed, high tiers are Massively Hypersonic.

​​​​​​The verse contains multiple realms within it, those being the Human Realm, the Spirit Realm and the Void, with multiple implications of other universes existing.

The Void: A warped realm of chaos where the demonkind originate from, ​formerly ruled and controlled by Drall the First. Its inhabitants mainly consist of an uncountable amounts of mindless predators who live mainly to consume. Its effects can corrupt and turn any living being into its minion.

The Spirit Realm: ​A realm mystical in nature, containing the very aspects of Concepts like War, Absolution, Peace, Nature, Power etc. within it. Its inhabitants mainly consist of Spirits and the souls of the warriors who died in a war.

The Human Realm: A realm which almost every Dungeon Hunter Game start at and take place in. Its inhabitants are very diverse, ranging from Goblins to the Undead to humans. It contains dozens of nations within it, the most noticeable one being the Valenthia. Being the main target of the creatures of the Void, the realm has a lot of ways to protect itself from them. Ranging from Arcane Magic to steel.

Magic: The Usage of Magic in the verse is pretty diverse, ranging from Healing and Life Manipulation to Death Manipulation ​​​​and Curse Manipulation. The most potent forms of magic can be used to manipulate probability to the point where most opponents die by a misplaced step even before a single hit is thrown.​​​​​​​ 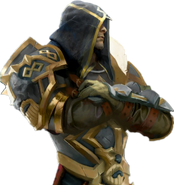 Malcor the Quartermaster
Add a photo to this gallery 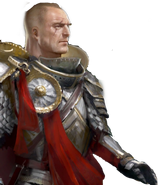 Ser Baker
Add a photo to this gallery 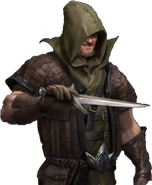 Senkis
Add a photo to this gallery

Some of the more noticeable weapons in the verse are these: