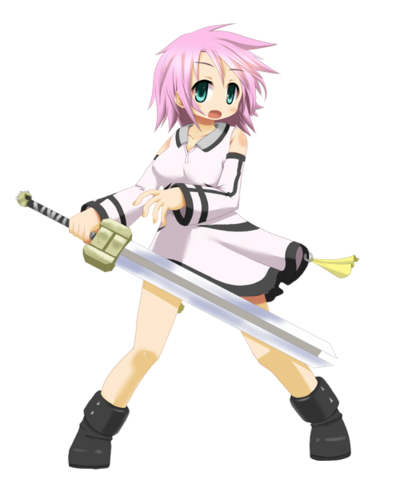 Duna is a Playable Character in Wonderful World. She is a Bounty Hunter residing primarily in Ainefir. Duna can discharge lightning when excited. Despite this, she's a very polite woman. Since her childhood, Duna's lightning has made the neighborhood children avoid her in fear. Her parents are Blacksmiths who didn't see Duna this way, and created a sword to absorb electricity. It was passed down to Duna. However, even without training, Duna was able to wield this with ease. The Discharges are a Singular ability; thus is not magic, thus there seems to be magic separate from this but there was no sense regarding this. Duna became a Bounty Hunter at age 16. She has it very hard; as she breaks extra things, she does not get rewards but rather, as a reimbursement fee. As she is always poor, Duna mourns the fact that she never gets to eat meals every day. Likewise, She has admired Orphe, & has since teamed up with her for help; shenanigans ensue.

Duna's weapon is Crimley, It is a Sword that can attract the Electricity, and makes the ore Stronger. The reason Duna's Parents created this sword is so her children can use such weapons as Duna is trained as a Blacksmith. She expected a Dagger, but is nonetheless proud. Doesn't completely Suppress Lightning, and there are times where it is discharged to a surprising rhythm. It can absorb lightning strikes at a range of tens of meters.

Powers and Abilities: Superhuman Physical Characteristics, Electricity Manipulation, Hunger Suppression, Advanced Swordsmanship, Can shape her Electric Discharges into attacks. (By creating & shaping electric Discharges, she can make attacks that count as lightning regardless of its shape).

Range: Tens of meters with Crimley. Farther with her Electricity Manipulation.

Intelligence: Average. An expert bounty hunter, although she is still a Japanese high school student.

Weaknesses: Can't get too excited, otherwise her Electricity Manipulation will affect her as well, is seen as the Boke out of her and Orphe (Duna's Senpai, and Tsukkomi.), and as such, suffers many of the comedic flaws of one. For more information on Tsukkomi and Boke duos, look HERE.

Feats: When using Thunder Spread, Duna uses all her electric abilities, and creates an energy strike so powerful, it can possibly kill even demons on range. Duna though, has survived this move every chance she uses it. She has practiced Hunger Suppression to compensate for the lack of money earned, as mentioned in a win quote when defeating Duna (She never ate for 3 days, implying she probably attempted this...)