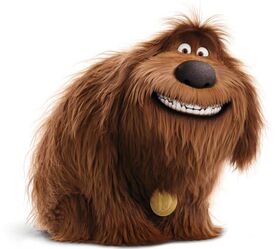 Duke is one of the main characters of The Secret Life of Pets. He is a Newfoundland mix and Max's best friend.

Attack Potency: At least Street level (Vastly superior to Max who can harm Sergei, can trade blows with those who can harm him)

Speed: Superhuman (Can outrun or keep up with humans or other pets) with Subsonic Combat and Reaction speed (Able to keep up with pets who can move like a blur in fights)

Lifting Strength: At least Regular Human (Can carry other pets and destroy and lift objects on his back), likely Above Average Human

Durability: At least Street level (Superior to other dogs)

Intelligence: Average (Despite his lack of intelligence and common sense, he is highly skilled in combat and knows how to manipulate even the smartest pets and humans)

Weaknesses: Is a airhead.

Start a Discussion Discussions about Duke (Secret Life of Pets)