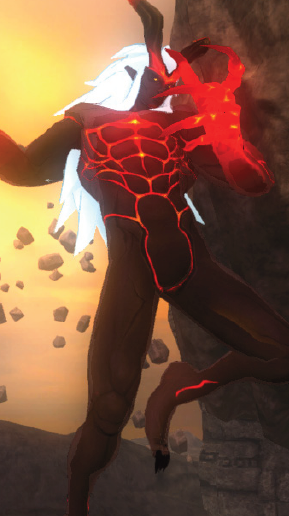 Powers and Abilities: Superhuman Physical Characteristics, Acrobatics (Possesses Acrobatics, Climb 175 and Jump 150), Enhanced Senses (Possesses Notice 160 and Search 40), Social Influencing (Possesses Leadership 135 and Intimidate 225. Although, in his current state is not likely that he do not use Leadership), Extrasensory Perception and Information Analysis (Can read the aura of other and dicern if supernatural powers has been released close), Elemental Manipulation including Fire Manipulation, Electricity Manipulation and Ice Manipulation; Minor Destruction (His physical attacks are infused with negative energy) that cause additional destruction), Homing Attack, Non-Physical Interaction (Only his spiritual counterpart), Exist in both Physical and Spiritual Worlds at the same time (Both forms are considered independent beings, and can't separate more than 100 m from each other), Immortality (Type 1 and 3), Regeneration (Low-Godly, as long one of his forms is alive, the other one will regenerate), Resistance to fire, lightning and ice attacks, Minor Weather Manipulation (Can create a small storm), Resistance to Status Effect Inducement (Can resist any alteration of the body of mind, as well as animic effects) and Immunity to Command Inducement (Can't be commanded by summoning abilities)

Speed: Superhuman to Subsonic (16.66 m/s to 53.33 m/s) with at least Massively Hypersonic+ reflexes (Attacks with lightning. Faster than Rudraskha)

Lifting Strength: Possibly Class M (Comparable to Nature's Wrath), Class T with preparation, likely higher (With Feats of Strength 200, can increase by default his STRength by +2, making him comparable to Behemoth, with a fair chance to increase it up to +3)

Weaknesses: It takes him half hour to regenerate one of his forms, a time in which he can't perform any action in that form

Retrieved from "https://vsbattles.fandom.com/wiki/Druaga?oldid=5156962"
Community content is available under CC-BY-SA unless otherwise noted.