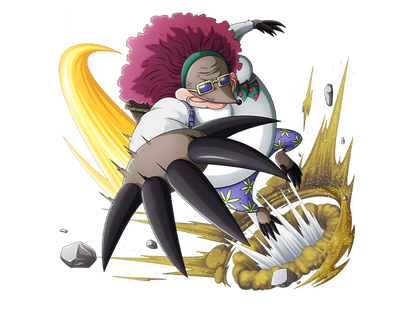 Drophy, also known by her epithet “Town-Collapser” and alias Miss Merry Christmas, is a former officer agent of Baroque Works and the talkative partner of Mr. 4. Due to her love of talking, she tends to acts as the brains of the Mr. 4 pair. Unlike her partner, who is very slow, Drophy talks very quickly, often only pronouncing the first syllable of the word in a high-pitched, child-like voice. She has eaten the Mogu Mogu no Mi which grants her the ability to turn into a human-mole and dig large tunnels.

After the events of Alabasta, she's captured but escapes with Miss Goldenweek's help and begins to work in the new Spider Cafe as a princess-waitress.

Power and Abilities: Superhuman Physical Characteristics, Transformation (Into a mole and a hybrid), Enhanced Senses (Zoan users gain the senses of their respective animals), Natural Weaponry (Has sharp claws)

Durability: At least Large Building level+ (Albeit was knocked down by a single hit from Mr. 4)

Retrieved from "https://vsbattles.fandom.com/wiki/Drophy_(Miss_Merry_Christmas)?oldid=5208146"
Community content is available under CC-BY-SA unless otherwise noted.